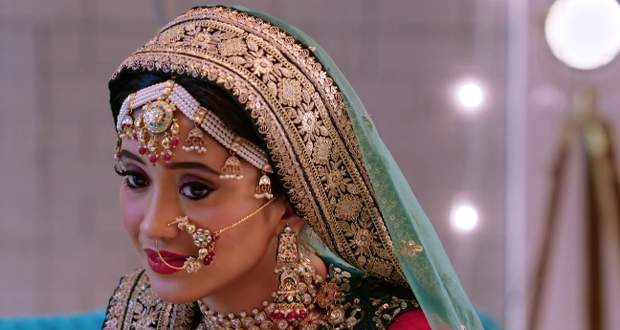 Today's YRKKH 12 Aug episode starts with Kartik flirting with Naira and complimenting her. Kartik asks if Naira is going to dance on the item number seeing her pose.

Suvarna asks Manish to get ready while he just smiles and doesn’t say anything. Later, they all gather for the Teej Pooja except Manish. Naira recites the story of Teej while later Manish arrives downstairs.

Naira and other ladies start dancing while Manish acts all weird. Suvarna thinks Manish is joking about something while Naira gives a surprise to Kartik.

She gives a lot of gifts to Kartik and they share some romantic moments together. They also enter the car and do romance. Later, the ladies and gents gather on the terrace for Teej rituals.

Manish continues to act weird while Suvarna feels weird with his behavior. Suvarna thinks Manish is upset with her while Manish drinks water himself.

Later, he puts water in Survarna’s plate and gets scared of her shouting. He runs away while Kartik tries to talk to him. Kartik further saves his head from hitting the bench.

Manish is all scared but still holds Kartik’s hand and walks with him inside. Manish later asks Survarna to stay away from him and acts like a child.

Kartik calls the doctor and learns something shocking about Manish’s reports. Naira tries to ask Kartik about the reports but he shows his anger towards her.