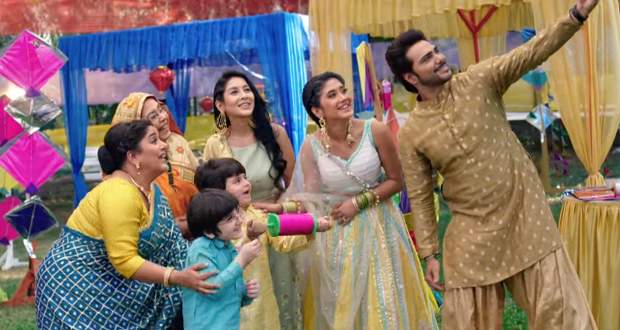 Vansh gets upset while Vedika wishes to fly kite. Meanwhile, Kairav wants to go to Kartik’s place but doesn’t want to leave Naira as well.

Naira promises Kairav that everything will be alright while they also start flying kite. Elsewhere, Vedika tries to win everyone’s heart but fails.

Vedika tries to console Suhasini in believing that she is part of the family. Suhasini accuses her of playing games with their emotions.

Vedika calls Pallavi and says she is scared that she can ever make her place in the Goenka family. Pallavi wants Vedika to win Kartik and not give up.

Meanwhile, Kartik and Naira fly the kites and continue to miss each other. Vansh requests Gayu to take her to Kairav’s house while they make some excuse.

Kairav gets really happy to see Vansh. Later, Akhilesh and Surekha also make an excuse and reach the Singhania house to celebrate the festival.

Manish and Suvarna also leave while Suhasini also says that she is going to the temple. Meanwhile, Naksh continues to search for Umesh Gupta.

Later, Kartik also arrives while playing a dhol to meet Kairav. However, he is not alone and Vedika has come along with him.

© Copyright tellybest.com, 2018 & 2019. All Rights Reserved. Unauthorized use and/or duplication of this material without written permission from tellybest.com is strictly prohibited.
Cached Saved on: Monday 6th of April 2020 08:45:43 PM