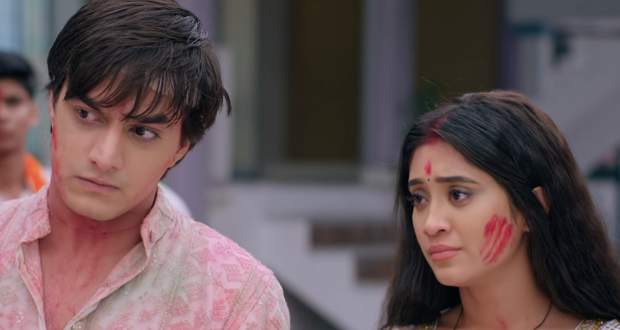 Today's YRKKH 13 Mar episode starts with Naira calling for Kartik and Kairav in an unconscious state. She thinks she will not survive while Kartik gets suspicious of Jhaberi.

Kairav and Vansh ask for their fog machine from Suhasini while later Suhasini asks Suverna to talk to Naira about returning to Goenka house.

Later, Vansh and Kairav find the machine near the pit and try to take it out. They remove the plants and open the pit using a rope. They are unable to see Naira because of fog but he sees her later in the camera.

He calls Kartik and everyone rushes towards the pit. Kartik jumps in the pit to save her while Jhaberi and Abhishek decide to sneak out of the Goenka house.

Naira is brought inside the house and she gains consciousness. Everyone feels relieved and asks her who pushed her inside. Kartik guesses that if it is Jhaberi while Manish returns with Jhaberi and Abhishek.

Manish reveals that he and Kartik found Jhaberi’s watch and he caught Jhaberi leaving in a hurry. Later, Naira reveals the whole story of how Jhaberi tried to kill her by pushing her inside the pit.

Kartik gets mad at Jhaberi while the whole family believes Naira. Jhaberi asks for proof while everyone supports Naira.

Upcoming YRKKH episode update: Kartik and Naira explain why it is necessary to put an end to molestation.

© Copyright tellybest.com, 2018 & 2019. All Rights Reserved. Unauthorized use and/or duplication of this material without written permission from tellybest.com is strictly prohibited.
Cached Saved on: Wednesday 8th of April 2020 07:50:43 AM