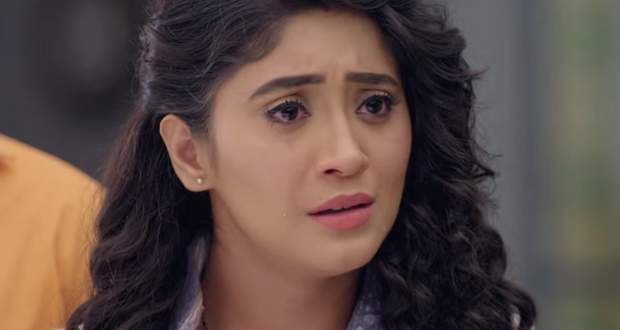 Today's YRKKH 14 Feb episode starts with Kush threatening to jump off the railing. Surekha blames Trisha and Naira for the situation while Kartik and Naira approach to save Kush.

Naira wonders if it is their plan while Luv consoles Kush as it is just a drama. Kartik and Naira are interrupted by Kairav and Vansh.

Kush is scared and gives his hand to Kartik and gets saved. Naira and Kartik try to talk to them but Surekha doesn’t let them say anything. She further blames her for being the murderer of Shubham.

Surekha offers to help Trisha in any way but requests Naira to not give them punishment. Naira gets upset with Surekha’s statement and is unhappy with the inequality between boys and girls.

At the same time, the police arrive and everybody thinks Naira has called the police. The police are there to take Trisha’s statement and ask if Naira has learned something.

The family members don’t let Naira say anything and Surekha asks Naira to let the police go. She doesn’t want Naira to tell anything to the police and solve the matter at home.

The nurse comes outside to tell Naira that Trisha wants to talk. Inspector learns Trisha is awake and enters the room to question her. However, Trisha coughs a lot and is unable to speak.

Upcoming YRKKH episode update: Kartik doesn’t want Naira to involve police while later he is unable to find her.