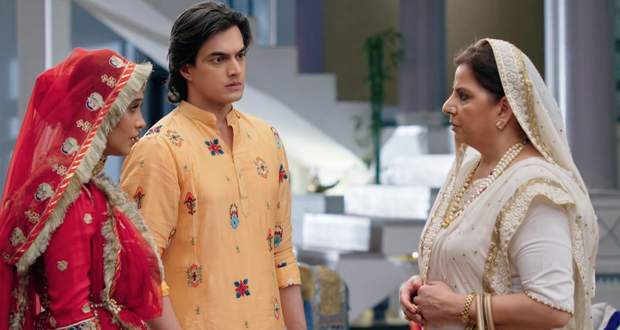 Today's YRKKH 14 Jul episode starts with Naira wanting Sita to apologize to the temple worker. Sita reminds her about her culture and sacrament while Goenka's family is sure Naira will handle everything.

Sita also comments on her clothes while Naira again argues with her. Later, Naira returns home in anger while Kartik enquires about her upset state.

Kartik calms her and asks her to get ready in the traditional style. Sita arrives at Goenka's house and observes everyone. Sita is delighted to see her traditional welcome and asks for Naira.

Sita gets a painting removed from their house while Surekha feels weird. Naira has covered her face and welcomes Sita by dancing on a traditional song.

Naira gets scared to see the woman from the temple as Sita while Sita gets angry to see her. Sita reveals that she has met Naira before and has seen her uncultured self.

Sita refuses to give them loans as their daughter-in-law is uncultured. Sita is about to leave when Naira stops her and says the girl she met might be her twin sister, Tina.

Naira explains that they look alike but are very different. Sita refuses to believe her and says she knows Naira has made up the story. Naira still tries to make Sita believe that Tina is her sister.

Naira explains her using the example of Luv and Kush. She also reveals that her hair is straight whereas Tina’s hair is curly.