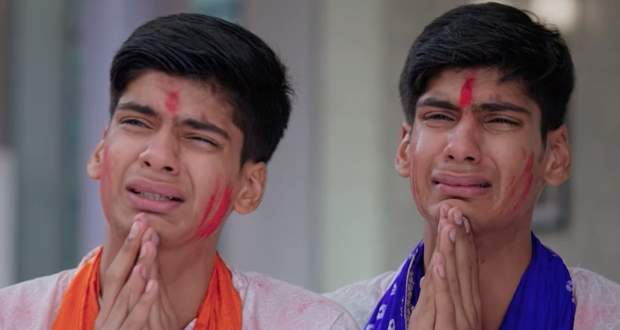 Today's YRKKH 14 Mar episode starts with Jhaberi asking if Naira and Kartik have proof. He also accuses the Goenka family of conspiring against him.

Jhaberi is sure he can be saved from this case as well but Naira and Kartik start laughing. Kartik further shows him the chip which contains proof against the boys.

Naira reveals that the chip contains a video of molestation done by Luv, Kush, and Abhishek. Naira plays the video wherein Kush, Luv and Abhishek are molesting Trisha while she requests to leave her.

Luv and Kush request to stop the video and start crying. Kartik gets really angry and them and scold them. Akhilesh feels shameful while Kartik is also ashamed of his brothers.

He also asks if someone does that to their daughters, will they keep quiet. He further tells Manish that Kairav also thinks that he can do anything.

Suhasini slaps Luv and Kush while everyone in the Goenka family realizes they have done wrong. Kartik suggests Naira sacrificed her family and her son to take stand for truth.

Kartik slaps Abhishek and accuses Jhaberi of his deeds. Manish wants to call the police and Jhaberi realizes his mistake. He says he will admit his and his son’s crimes and will call the police.

Later, Luv, Kush, Abhishek, and Jhaberi get arrested as Jhaberi gives a statement to the police. Jhaberi also apologizes to Trisha for doing wrong with her.

Kairav wonders if he has to leave Goenka house while Naira says they will stay there only.