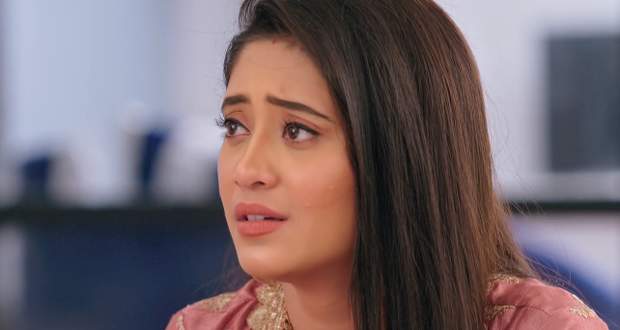 Today's YRKKH 15 Aug episode starts with Naira telling the doctor that she doesn’t want second child. She starts crying while Manish asks her not to shed tears.

Manish in his childish behavior asks Naira to smile and become friends with her. Kartik is upset that the medical professional is not giving time.

Suhasini is upset with the year so far and reveals Kirti is also not coming. Naira wishes to call Devyani and Naksh for Rakhi. Naira also learns that the girl who came in front of her car is in the hospital.

She plans on meeting her bumps into Kartik. She imagines an invisible wall being built between them. Naira sits in the car and remembers the road accident.

Naira meets the girl and witnesses that she is doing drama at the hospital. The girl says she was following her car for returning her purse. Naira understands her drama and asks for her purse.

The girl lies that she lost it and asks for more money. Later, Naira is ignored by Kartik again while later Naksh and Devyani visit Goenka house for Rakhi.

Manish refuses to meet them as he doesn’t know them. Naksh senses tension between Kartik and Naira but is unable to speak anything. Naira and Gayu celebrate Rakhi with Naksh. Suhasini misses Kirti while later Kirti makes an entry.

© Copyright tellybest.com, 2018, 2019, 2020. All Rights Reserved. Unauthorized use and/or duplication of this material without written permission from tellybest.com is strictly prohibited.
Cached Saved on: Wednesday 28th of October 2020 05:38:17 PM