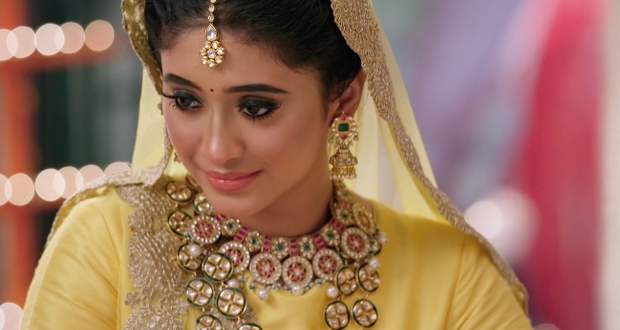 Today's Yeh Rishta Kya Kehlata Hai (YRKKH) 16 Oct episode starts with Kirti asking Kartik to leave the room. The kids discuss Krishna while she tries to be friends with Kairav.

However, Manish interrupts them and offers to give gifts to the boys. Kirti is all set to get Naira ready and also asks her not to see the mirror till the rituals start.

Kartik feels bad for not being there for Kairav’s childhood. Krishna comes at the same time and wishes to touch the baby while Kairav doesn’t like it. Manish still thinks Kartik and Naira’s adoption decision is wrong.

Later, Naira comes downstairs and Kartik is desperate to see her. Naira’s face is revealed and she looks very beautiful. Kirti asks for a big gift and gets upset to see the Sindoor box and red saree as her gift.

Naira talks to Varsha who tells her that the newborn looks exactly like Akshara. Naira gets emotional and misses her mother. Later, the rituals start and Kartik wishes to wait for Krishna.

Krishna brings a Matki of water while Suhasini states that they don’t perform that ritual. However, the Pandit states that they can keep the Matki. The Pandit asks them to keep a home name and he himself goes to select a letter for her.

Kairav wants to keep the baby’s name Kitty while Krishna makes fun of his name. Kartik says he can call her by Kitty but they still need an official name. The Pandit says the letter is A and Naira selects the name Akshara.

Upcoming YRKKH episode update: Kairav gets upset when Krishna is included in the family photograph.