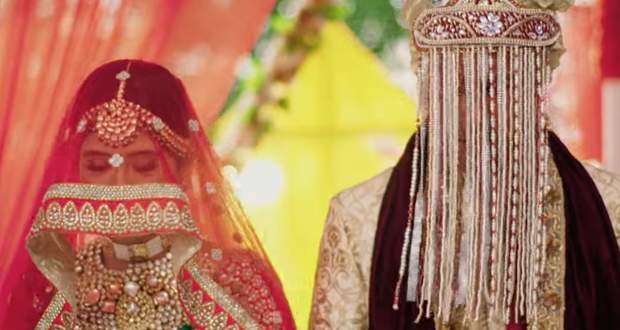 Today's YRKKH 17 Jan episode starts with Naira and Kartik getting worried about their stuck clothes. Meanwhile, Goenka family gets upset with Panditji for not informing about the animals.

Naira’s Lehanga is saved but Kartik’s Shervani gets tore. Naira gets into the car with Gayu while Kartik rushes to the Shervani store to get a new one.

Goenka and Singhania family continue to prepare for the wedding while Kairav and Vansh are asked to take care of the garlands.

Kartik reaches the store to buy Shervani while a man is wearing the same Shervani as his. The driver thinks it is Kartik and makes him sit in the car.

Naira arrives at the temple and Kairav and Vansh leave the garlands alone. A couple takes the garlands while Kartik gets stuck in the changing room.

The other person in the same Sherwani reaches the temple and the Pandit asks them to silent their phones. Kartik is not able to talk to anyone and decides to escape through the duct.

The man in the Shervani is there to marry some Monika and is confused about her family. Meanwhile, Kartik is not able to get any lift from anyone.

Elsewhere, the family discovers that garlands are missing and someone else has taken them. Later, they all learn that someone else is getting married to Naira instead of Kartik.

Upcoming YRKKH episode update: Naira asks the man in the Shervani about Kartik while Kartik is on a two-wheeler.

© Copyright tellybest.com, 2018 & 2019. All Rights Reserved. Unauthorized use and/or duplication of this material without written permission from tellybest.com is strictly prohibited.
Cached Saved on: Sunday 5th of April 2020 03:21:00 AM