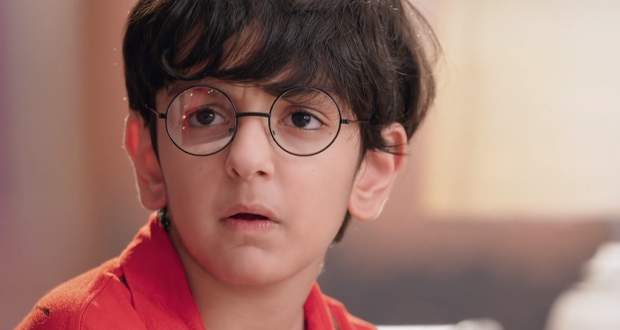 Naira writes the name on the mirror making it official. Kirti and Naksh are worried they have to click family pictures while Kairav gets jealous of Krishna being in the family picture.

Kairav states that their family consists of four people and that he will not be in the picture if Krishna is included. Naira tries to console Kairav and tell him the stories of Goa’s church.

She wants him to be a brother or friend of Krishna. Kairav stays quiet while Kartik lifts up his mood by offering to give roller skates to him. Vansh also demands roller skates while Samarth refuses.

The photographer is about to click the family picture when Kartik and Naira stop him. They say Krishna is missing which upsets the whole family. Krishna comes and sits in the center while Kairav feels neglected.

Kartik learns that they have to adopt Krishna within two days or else she will be taken away. Meanwhile, Kairav and other kids go to Kairav’s room and find Krishna’s clothes and accessories.

Kairav gets upset while Vansh and Krish make fun of him. Krishna comes inside and asks for her belongings while Krish wants her to play with them. She plays with them for a while and Kartik and Naira witness this scene.

They think kids are bonding and decide not to talk to Kairav right away. However, as soon as they leave Kairav gets mad at Krishna and asks her to leave the room.

Bhabhi Maa and Devyani decide to surprise Naksh and Kirti along with Naira and Kartik. Naksh and Kirti decide to reveal about their divorce. Later, Vansh overhears Manish and Suhasini’s conversation and tells Kairav that his parents are adopting Krishna.

Upcoming YRKKH episode update: Kairav gets stuck at home alone while Kartik and Naira are unaware of it.

© Copyright tellybest.com, 2020, 2021. All Rights Reserved. Unauthorized use and/or duplication of any material from tellybest.com without written permission is strictly prohibited.
Cached Saved on: Tuesday 28th of September 2021 07:55:29 AM