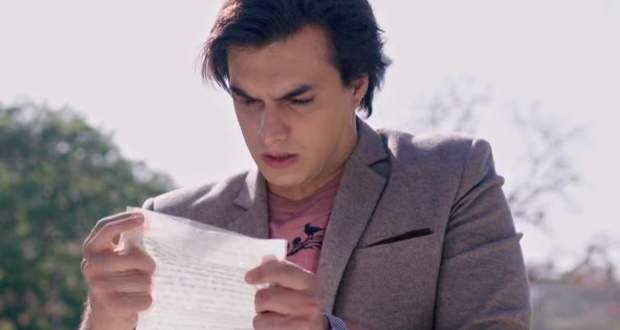 Today's YRKKH 19 Mar episode starts with The inspector telling Kartik about the child racket and assuring he will find something. Naira witnesses his conversation and gets mad at him.

Naira feels bad for being mad at Kartik and rushes to meet him but Kartik leaves to find out the truth. Later, Naira is asked to try out jewelry with the family and imagines being with Kartik.

Kartik meets Leela and enquires about being involved with the child racket. Meanwhile, Vansh gets upset when Samarth calls him fat while Kartik receives a letter from Leela.

Naira decides to send Gayu and Vansh to Singhania house as a ritual. Samarth calms down and decides to take care of Gayu. Later, Kartik returns home and Naira reads the letter.

She gets shocked and shattered while Kartik consoles her. It turns out to be Kartik’s imagination and he hides the envelope from Naira. He remembers reading that letter from Leela.

The letter states Naira and Kartik’s daughter is alive and that she was forced to give someone the daughter in exchange for 10 lakhs. She apologizes for her actions and also gives the photo of the person who gave money to her.

Later, Goenka family members enjoy while eating ice cream while Kartik is lost in his thoughts. Kartik hires a private investigator to get the information of the person in the photograph.

Kartik meets the investigator and gets some information while Naira is called by Rama Daadi. Rama says she wants to talk about some kid which can change everything.