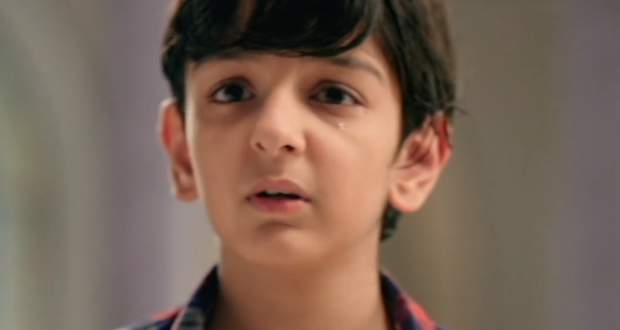 Today's Yeh Rishta Kya Kehlata Hai (YRKKH) 19 Oct episode starts with Kartik getting restless as Akshara doesn’t sleep all night. Kartik wants to go to the doctor while Naira consoles him that the baby is fine.

Kirti reminisces the old moments spent with Naksh and at the same time, Krish comes there. Meanwhile, Kairav confronts Naira about adopting Krishna but Naira is busy with the baby and doesn’t listen to him.

Kairav thinks Naira is going to talk to Kartik about not adopting Krishna and thanks to her. Naira doesn’t listen to him and is unaware of what Kairav just said while Kairav gets happy that Krishna will not become his sister.

Kairav doesn’t want to go to Singhania house because of Krishna. Kartik and Naira think that Kairav went with the family but he is at the house waiting for his parents to leave.

Kartik and Naira leave without witnessing that Kairav is still at home. Someone from the authorities come to meet Kartik and Naira for the adoption of Krishna and ask them to sign.

Naira and Kartik sign the papers without talking to Kairav as they fear for Krishna. Kairav overhears their conversation and is shocked to learn they are adopting Krishna.

Kartik and Naira lock Kairav and she shouts from inside. He rushes in the balcony and his spectacles also fall down. Kartik and Naira are unaware to learn that Kairav is not with the family.

The family accidentally surprises Kartik and Naira while later the family gets shocked to learn about Naksh and Kirti’s divorce.

Upcoming YRKKH episode update: Naira is upset with Kirti and Naksh while Suhasini takes a decision.

© Copyright tellybest.com, 2018, 2019, 2020. All Rights Reserved. Unauthorized use and/or duplication of this material without written permission from tellybest.com is strictly prohibited.
Cached Saved on: Wednesday 2nd of December 2020 06:03:15 AM