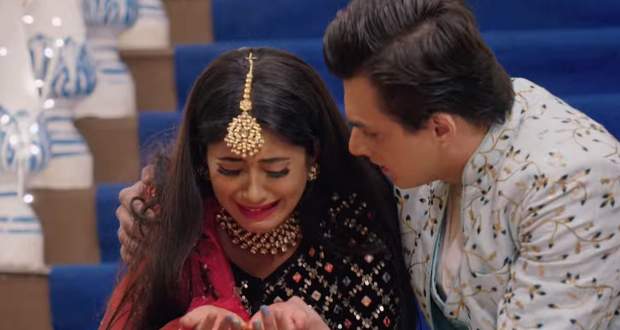 Today's YRKKH 20 Dec episode starts with Daadi asking Naira to make the Mehendi as Guruji has told her. Naira takes the plate from Vedika but can see that she is angry.

Kartik offers to help Naira while Daadi taunts Vedika to stick to her decision. She wants Vedika to not do bad with anyone else if fate has done wrong with her.

Later, Kartik wonders why Naira is upset while Naira feels bad for Vedika. Naira is also worried about Daadi’s behavior towards Vedika.

Kartik assures her that everything will get fine after divorce while later they both share some romantic moments.

The function of Mehendi starts and Naira dressed all beautiful. She walks down the stairs but loses her balance. Kartik saves Naira from falling and getting injured.

Naira’s hands are all scraped and family members get worried that Mehendi will increase her pain. Naira gets upset and starts crying.

Kartik and Kairav decide to get the Mehendi on their hands for Naira. Vedika gets upset to see their love and acts of falling down along with spilling the Mehendi.

Vedika apologizes and everybody gets worried for her including Naira and Kartik. Daadi knows she is doing it on purpose and says she will not get successful in her actions.