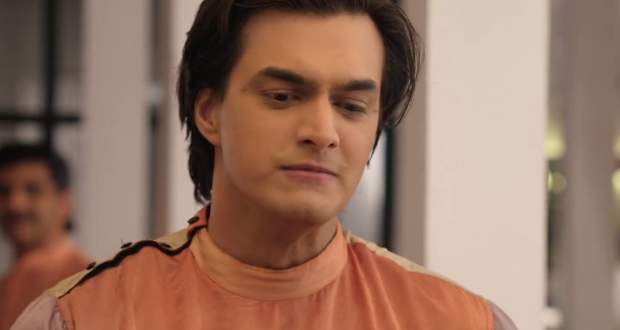 Today's YRKKH 21 Aug episode starts with Chori getting scared of the police inspector. She reveals that she doesn’t have money or a place to live and wants a maid job at Goenka house.

The police inspector reveals that Chori has to stay there for a few days as they need to complete some paperwork. Kartik allows Chori to stay while the inspector asks him about his investigation of his daughter.

Kartik and Naira refuse to know anything as their daughter is dead. Kartik further asks Naira to keep Chori away from Manish and warns about her causing any trouble to Manish.

Naira is able to understand Chori’s drama and asks her to not create any havoc. Later, Chori sees Manish playing a video game and tries to snatch the tab.

Manish falls off the stairs and gets scared. Kartik calms him down while Naira asks Chori to apologize to Manish. Suhasini is afraid that Chori will create a bigger rift between Kartik and Naira.

Naira gets upset with Chori while Kartik is furious at Chori for calling Manish ‘Bawla’. He asks her to be a good girl and not to go near Manish. He also warns Naira while she is hurt.

Chori wonders why Kartik is so angry while Naira explains his behavior. Chori reveals she doesn’t know anything about his parents. The next day, everyone prays in front of Krishna on the occasion of Janmashtami.

At the same time, Manish starts throwing books from the book rack as he doesn’t like any of them. Kartik feels helpless as he can’t help his father.