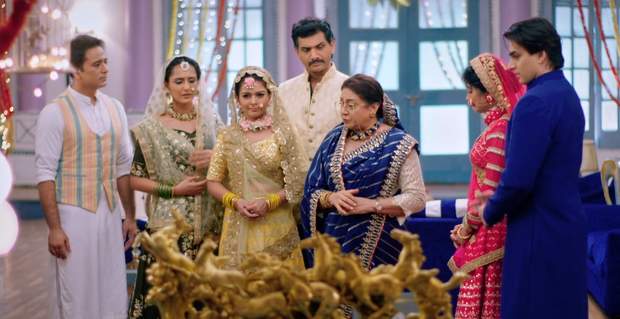 Today's YRKKH 21 Jul episode starts with Suhasini getting upset about letting go off the house. Naira and Kartik imagine the auction of their house and get upset.

Naira and others in the house trying to get a loan from some investors. Suhasini declares that she has decided to put the house for a mortgage. Kartik and Naira don’t want to give up but Suhasini doesn’t want to trouble her kids.

Sita arrives at the same time and shows her trust in the Goenka family. Sita also introduces her son and also praises Kartik for taking a stand for his wife.

Sita further decides to give the loan to the Goenka family. She gives the papers to Naira while Naira hides the pain in her foot. Meanwhile, Kundan is desperate to get the money from his mother.

Sita praises his son while Naira thinks his smile is fake. Naira wants to know if Sita will forgive her if she ever makes a mistake. Meanwhile, Surekha and Suvarna try to impress Suhasini by making the same Halwa.

Kundan is worried about the money and even gets threatened. Naira sees him talking on the phone and gets suspicious. Later, Naira starts singing a Bhajan while Sita also sings but in a bad voice.

Upcoming YRKKH episode update: Naira gives a performance while Sita Ji is about to fall off the swing.

© Copyright tellybest.com, 2018, 2019, 2020. All Rights Reserved. Unauthorized use and/or duplication of this material without written permission from tellybest.com is strictly prohibited.
Cached Saved on: Sunday 1st of November 2020 03:36:40 AM