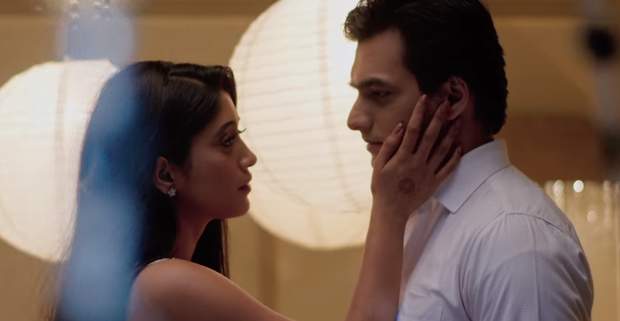 Today's YRKKH 22 Jan episode starts with Naira and Kartik reaching their honeymoon suite. They learn that Kairav is busy playing passing the parcel.

They get really happy to see the room decorated. Naira finds a nightgown and feels shy. Meanwhile, Luv does cheating while playing and Trisha accuses him.

Naira and Kartik miss Kairav and learn he is not missing them. However, Kairav is shouting and wants his mother near him.

Kartik and Naira continue to romance and get intimate with each other. Later, they get a call from Kairav who is crying on the phone.

Naira and Kartik decide to return while they return to find him sleeping. Meanwhile, Luv and Kush are worried about Trisha and enter her room.

Naira finds them in Trisha’s room and enquires about their presence. Trisha tells Naira the whole story while Kartik also arrives and gets mad at Luv-Kush.

Luv and Kush try to manipulate the story and lie to Kartik. Trisha is forced to lie too as she doesn’t want to trouble Naira and Kartik.

Kairav doesn’t want to go to school while later he goes to meet Luv and Kush. Vansh and Kairav are unable to wake them up while later their sleep is disturbed because of Trisha’s dance practice.

Luv complained about the music disturbing everyone in the house. Later, Naira and Kartik romance in their room and share some fun moments.

© Copyright tellybest.com, 2018 & 2019. All Rights Reserved. Unauthorized use and/or duplication of this material without written permission from tellybest.com is strictly prohibited.
Cached Saved on: Thursday 30th of January 2020 04:11:48 PMCached Disp on: Monday 17th of February 2020 07:55:12 AM