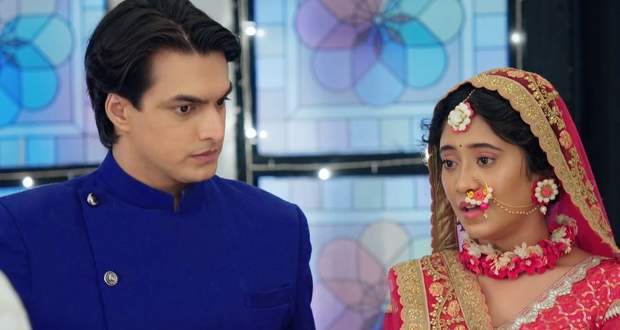 Today's YRKKH 23 Jul episode starts with Kundan witnessing Naira and Naksh in a worried state. Naksh tells Naira and Kartik that Kundan is suspicious about their act.

Naira and Kartik don’t believe him while Kundan makes a video of their conversation. However, the video doesn’t save on his phone and decides to tell her the truth.

Kundan tells something to Sita Ji while Manish gets a call from the investor. Sita Ji says Kundan is suggesting that Tina should also be there with them.

Sita Ji insists on calling Tina while Naira says she will remain in her room when Tina arrives. Naira is about to leave when Kundan asks her to stay around.

Sita Ji sends Naira in her room and she rushes to change her clothes. Later, Sita Ji and Kundan go out to see Tina and find her outside with Kartik and Naksh.

Kundan knows the truth and is adamant to prove Naira and Tina are one. Kundan spills a drink on her and Naira is forced to go and clean it. Kundan also follows her to wash his hands.

Naira is trapped by Kundan in a room to expose her while later Kartik finds her in the generator room. She is unconscious and Kartik and other family members call her Naira in a worried state.

Sita Ji is shocked to witness the scene while Naira gains consciousness. She gets mad at Naira for lying to her and breaking her trust. Kundan asks Sita to not listen to them. Naira requests Sita Ji to listen to her explanation once.