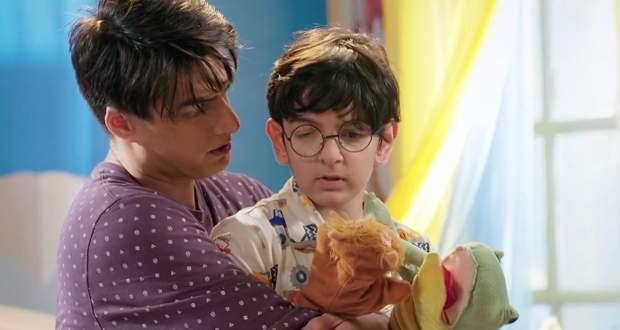 Naira apologizes to Kairav for talking to him late while Kairav falls asleep. Kartik comes there and Naira consoles him. Meanwhile, Manish is scared and has seen the same remorse in Kairav’s eyes that he saw in Kartik’s eyes years ago.

Naksh imagines Krish in his room and misses him. He calls to talk to Krish but Manish refuses to let him talk to Krish. Later, Kairav finds Kartik and Naira sleeping on his bed.

He puts a blanket on them and tries to stop Akshara from crying. Kartik and Naira wake up and try to talk to Kairav but he ignores it. Kairav and Krishna both prepare Chunri for Akshara.

Samarth and Gayu get into a fight as Samarth scolds Vansh. Naira tries to talk to Kirti but she refuses to acknowledge it. Further, Kairav is excited to give the Chunri but Krishna gives the Chunri before him.

He gets upset and throws Krishna’s Chunri away. He goes outside while Krishna also gets upset. Kairav knows Krishna has an unfortunate life but is not ready to share everything.

Kartik and Naira plan on doing something to make things right. Vansh and Krish console Kairav while Manish sings a song to cheer up Kairav.

© Copyright tellybest.com, 2018, 2019, 2020. All Rights Reserved. Unauthorized use and/or duplication of this material without written permission from tellybest.com is strictly prohibited.
Cached Saved on: Tuesday 1st of December 2020 01:57:13 PM