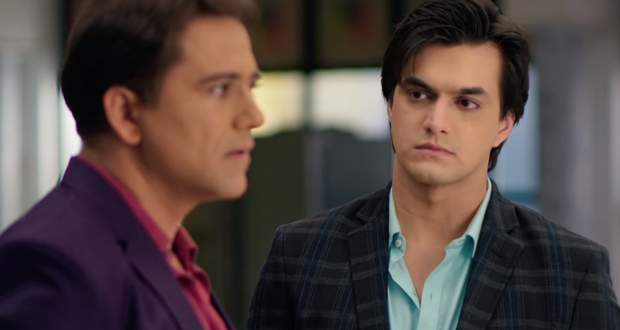 Today's YRKKH 25 Feb episode starts with Naira telling everyone about Abhishek being Jhaberi’s son. They accuse him of trying to save his son by removing his name from the case.

Abhishek arrives at the same time and confidently challenges Kartik. Jhaberi is also sure about her skills and instigates Manish against Kartik and Naira.

Jhaberi asks for a cup of tea and gives answers to their questions. He explains that he was trying to save Luv and Kush by hiding Abhishek. He further reveals he wanted to save the case from media and the public.

Manish asks the police to leave while later he gets mad at Kartik. He accuses him of taking Naira’s side and not thinking of his family. Kartik wants him to understand that he is just supporting the truth.

Manish asks Kartik to leave with Naira and their truth. Meanwhile, Kairav overhears Luv and Kush’s conversation and thinks Manish is very powerful.

Kartik and Naira decide to leave while Kairav refuses to go with them. He thinks they will take him to the police and asks Manish to save him from the police.

© Copyright tellybest.com, 2018 & 2019. All Rights Reserved. Unauthorized use and/or duplication of this material without written permission from tellybest.com is strictly prohibited.
Cached Saved on: Thursday 16th of July 2020 06:49:06 PM