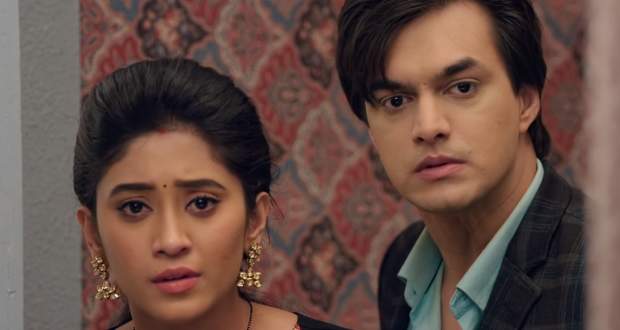 Today's YRKKH 26 Feb episode starts with the Goenka family asking Naira and Kartik to think about their action. Kartik and Naira are sure about their decision of supporting Trisha.

They have to leave Kairav for his betterment only. Later, Naira and Kartik arrive at Singhania house while Bhabhi Maa gets angry at Naira for her actions.

Naira reveals that she wants to support the truth so that they can set an example for other kids. Meanwhile, Suhasini is upset with Kartik and Naira while Manish asks Jhaberi to get over with the case.

Naira and Kartik are taking advice on the case and record Trisha’s statement. Kartik says he has taken Luv and Kush’s phone while at the same time, Surekha returns the phone to her sons.

Luv and Kush have already deleted the video but Kartik knows that they can retrieve deleted data. Meanwhile, Kairav misses his parents and starts crying.

Later, Kartik and Naira sneak into the Goenka house to get Luv and Kush’s phone. They decide to fist see Kairav and then steal the phones.

Gayu comes into the room and Naira and Kartik beg her to not tell anyone. Suhasini comes outside and Gayu lies that they are there to sleep with the kids.

Gayu knows they are there to get proofs against Luv and Kush. Kartik and Naira find them playing games and wonder how they can take their phone.

Naira logs into the game through Kartik’s phone and joins the same group. She beats both of them and gets them out of the game. They are forced to sleep and Kartik takes their phone.

Upcoming YRKKH episode update: Naira and Kartik refuse to settle the case out of court.

© Copyright tellybest.com, 2018 & 2019. All Rights Reserved. Unauthorized use and/or duplication of this material without written permission from tellybest.com is strictly prohibited.
Cached Saved on: Thursday 16th of July 2020 09:33:43 PM