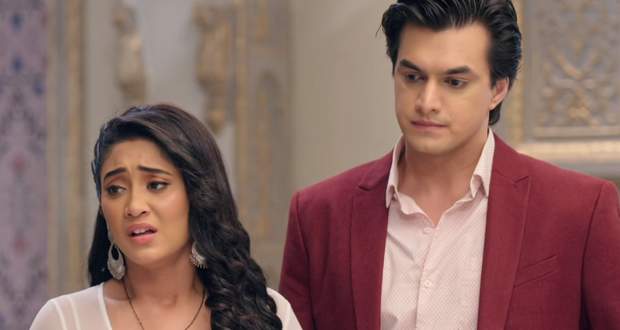 Today's YRKKH 27 Feb episode starts with Kartik dropping the phone on the floor. He and Naira manage to escape and again meet Kairav. They further make an airplane for him of paper.

They return home and Bhabhi Maa gets upset with them. Naira and Kartik decide to get their phones checked. Kairav wakes up and finds the paper toys.

He remembers his parents but later gets scared thinking of police. At the same time, Naksh reveals that the news of Luv and Kush is printed on the first page.

Manish learns the same and gets upset with Kartik and Naira again. Jhaberi arrives and says that their name will get spoiled for the case. He asks Manish to get the case settled out of court.

Jhaberi asks about their lawyer and at the same time, his secretary Shivani comes rushing. She turns out to be Kartik and Naira’s lawyer who has already given resignation.

Kartik refuses to negotiate out of court and Naira hints on having proof. Shivani is sure that their confidence will make them win the case. Meanwhile, Jhabheri is disturbed and knows Kartik and Naira have some proof.

Luv and Kush arrive and reveal that their phones are missing. Meanwhile, Kartik and Naira try to get the data from the phones.

Upcoming YRKKH episode update: Shivani asks Kartik and Naira to get the balloon seller who can act as a witness.

© Copyright tellybest.com, 2018 & 2019. All Rights Reserved. Unauthorized use and/or duplication of this material without written permission from tellybest.com is strictly prohibited.
Cached Saved on: Tuesday 31st of March 2020 07:09:47 PMCached Disp on: Wednesday 1st of April 2020 01:55:44 PM