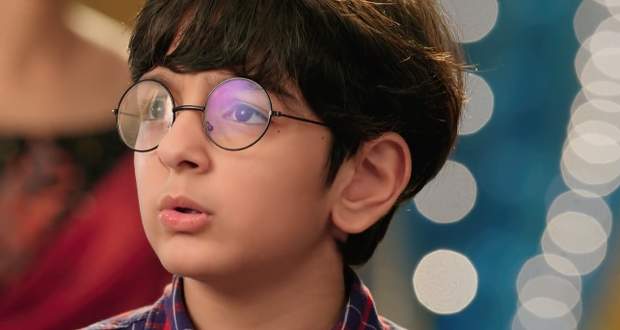 Kartik and Naira talk to the principal and come downstairs to tell Krishna that she failed the test. Krishna runs outside and gets upset.

Kairav feels bad for upsetting his parents while later Kartik and Naira tell Krishna that she got admission to the school as she gave correct answers.

Kairav asks Vansh and Krish to not plan anything and congratulates Krishna. He further tells the whole story of Ramayan impressing everyone.

Suhasini asks Kirti to teach Krish valuable lessons as well. Kartik suggests that they should organize a Ramleela for kids.

Manish and Suhasini talk about Kartik and Manish becoming Lord Rama years ago. They show the pictures to Kairav and tell Kairav that he will become Rama.

Kairav tells Krish and Vansh that he will become Rama. Vansh wishes to become Rama as well while Gayu gets upset due to indifferent behavior towards her kids.

Naira tries to console Kirti in trying to save her relationship with Naksh. However, Kirti ignores Naira’s suggestion while Gayu comes in there and states the family treats kids differently.

Manish and Kartik argue over Naksh’s behavior. Meanwhile, Bhabhi Maa tries to console Naksh but he wants his son back.

Kartik calls Naksh and asks him to come to see his son’s performance. Later, Naira gives a cookie to everyone and puts the name of the characters in it.

Krishna gets Hanuman while Krish becomes Rama. Sita’s role is given to Vansh while Kairav gets upset to get the role of Ravan.

Upcoming YRKKH episode update: Suhasini gets upset with Krishna for picking up Akshara.

© Copyright tellybest.com, 2018, 2019, 2020. All Rights Reserved. Unauthorized use and/or duplication of this material without written permission from tellybest.com is strictly prohibited.
Cached Saved on: Thursday 26th of November 2020 10:21:24 AM