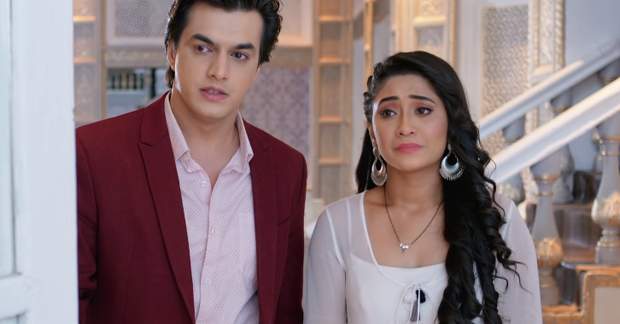 Today's YRKKH 28 Feb episode starts with Kartik and Naira trying to unlock Luv and Kush’s phone. Jhaberi is sure that Gayu knows something as she is scared.

The process of unlocking of phones stops while Gayu is sent to get the phones from Singhania house. She is compelled to go and meet Bhabhi Maa asking for phones.

She shares her grief with Bhabhi Maa and wants her to do something. Naira and Kartik hear their conversation and feel bad for Gayu.

Someone takes the phone and Kartik and Naira find the phones missing. The hacker arrives and asks for phones while at the same time, Suhasini gives the phones to Manish.

Later, Naira goes to meet Gayu but is not allowed to go inside. Gayu gets mad at Naira as she feels alone and even Samarth doesn’t support her.

At the same time, Kairav arrives crying and reveals that he was injured. Naira makes him laugh and cleans his wound. She asks him to come along but the police sirens scare him.

He rushes inside the house and Naira is confronted by Suhasini inside. Surekha wishes to check Naira’s bag as she must have stolen something again.

Later, Bhabhi Maa assures Gayu that she will help her. Naira and Kartik meet her and ask if they are actually doing something wrong. Bhabhi Maa starts crying and is worried.

Naira asks Bhabhi Maa why she gave phones to Gayu. She says she did it to bring happiness in her daughter’s life.

Upcoming YRKKH episode update: Shivani decides to use the balloon seller as a witness.

© Copyright tellybest.com, 2018 & 2019. All Rights Reserved. Unauthorized use and/or duplication of this material without written permission from tellybest.com is strictly prohibited.
Cached Saved on: Saturday 4th of April 2020 04:19:51 AM