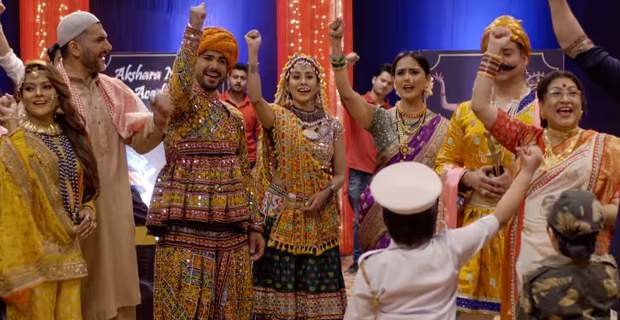 Kartik helps Naira in getting clicked for the photographs. He further turns the photographer and starts clicking her pictures. He also gets romantic for her.

Later, Trisha suggests in front of Luv and Kush’s friend that they will not get a new bike. The friend further entices them against Trisha.

Luv and his friend wish to change the script while Kush warns them against it. Later, the Goenka family arrives in different attires of different states.

Kartik explains Kairav and Vansh why the family members are wearing costumes related to different cultures. Later, Kartik consoles Naira that the function will go well.

Kairav and Vansh welcome the guests while Kartik and Naira explain the arrangements made by them. Later, Kairav and Vansh speak everything wrong in front of the minister.

Naira and Kartik arrive on the stage and apologize for the kid’s mistakes. Trisha learns that Luv and Kush changed the speech to take revenge. Trisha records their confession and wishes to tell Naira.

Luv takes the phone and breaks it while Trisha slaps him. Naira starts with her performance and Goenka members join her. Elsewhere, Kartik finds Trisha missing but she arrives on the stage.

Upcoming YRKKH episode update: Trisha is attacked by someone while Kartik gets shocked to see something.