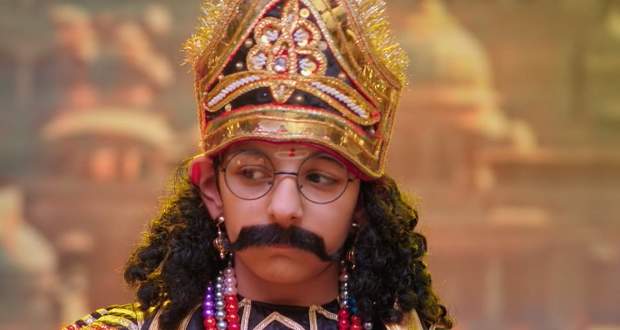 The play starts and Krishna’s hair opens. She messes up her lines while everyone laughs. Further, Vansh’s tail falls down and the play gets even funny.

Further, he speaks the lines very nicely. The Sita Haran seen doesn’t go so well as Kairav falls down accidentally.

Everyone gets worried while Kartik helps Kairav get up. Kairav completes his scene while Vansh also performs extremely well.

Krishna’s performance leaves everyone awestruck while Kairav is upset with her. Krish thanks Kartik and Naira for bringing his parents together to watch his performance.

Kairav gets upset to see Krishna with Akshara while later completes his seen. The Ramayan ends and Kartik and Naira praise Kairav for his acting.

Kartik and Naira also praise Krishna while Kairav feels dejected. The school committee member praises Krish for his efforts while Naksh gives the credit to Kirti.

Kairav doesn’t want Krishna to keep Akshara in her arms while Suhasini takes her from Krishna.

© Copyright tellybest.com, 2018, 2019, 2020. All Rights Reserved. Unauthorized use and/or duplication of this material without written permission from tellybest.com is strictly prohibited.
Cached Saved on: Wednesday 25th of November 2020 12:08:45 AM