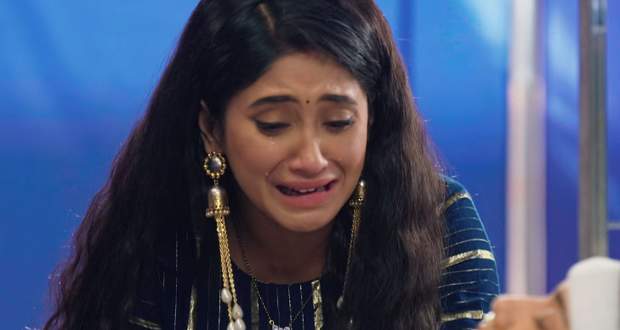 Today's YRKKH 31 Jan episode starts with Naira and Kartik being unable to find Trisha. Meanwhile, Luv, Kush, and Abhishek are hiding in the academy and Kush gets suffocated.

They come out and Naira and Kartik are standing just outside. Later, they catch Luv and Kush outside the academy and learn Kush is not well.

Goenka family members discuss Trisha’s case and at the same time, Luv and Kush arrive. Kush gets more tensed and unwell while Surekha gets worried for him.

Naira and Kartik reach the police station and find out that a girl has met with an accident. Naira enquires about the girl and gets upset to learn the details.

Kush is worried to get caught while Luv runs his mind to get saved. Meanwhile, Naira and Kartik find Trisha in the hospital ICU in a serious condition.

Luv and Kush get scared to learn that Trisha met with an accident. They also learn that it is a police case so police will question everyone from the house.

Luv hides the phone of Trisha in their garden but Kairav witnesses the scene. Later, Naira reveals that Trisha is in a coma and starts crying looking at her condition.

Naira and Kartik learn that Trisha was molested before the accident. The doctor reveals that Trisha has marks and bruises on her body. Kartik and Naira decide to find the real culprit while Luv and Kush try to save themselves.