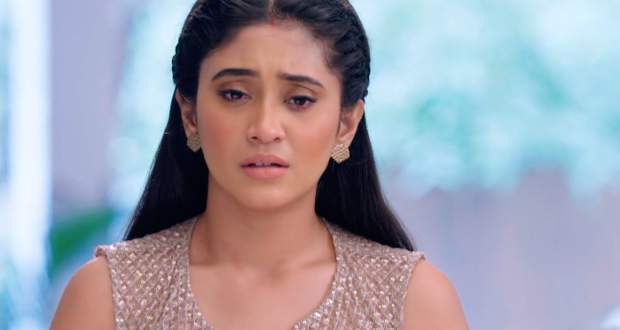 Today's YRKKH 31 Jul episode starts with Naira asking Kartik to make things right. She is ready to give the money back while Kartik wants her to think about everyone in the family.

Naira tries to console Kartik while he is adamant to save his family. Kartik asks her to leave and not tell anyone in the family anything. Later, Naira comes home and doesn’t talk to anyone.

Sita Ji is sure that Naira is suspicious of something. Elsewhere, Naira comes home and imagines Kartik in her room while Kartik is worried about Naira revealing the truth.

Sita Ji comes to meet Kartik and asks him to sign the confession papers early. Meanwhile, Naira learns that Suhasini has left the house and has written a letter.

Manish and Akhilesh start searching for her Suhasini while Naira finds Suhasini in the Aashram. Suhasini refuses to return home while Naira tries to console her.

Naira is forced to tell the Goenka family about Kartik’s sacrifice. She wants everyone to come along and remind Kartik that he is very important to them. However, Manish learns that Kartik has already signed the confession papers.

Naksh comes and tells Naira that Kundan is going to Delhi. Naira decides to take Tina avatar and stop Kundan from leaving. She reaches the airport and takes a paper out of Kundan’s pocket.

Upcoming YRKKH episode update: Naira decides to trap Kundan and asks him to put the accident blame on Sita Ji.

© Copyright tellybest.com, 2018, 2019, 2020. All Rights Reserved. Unauthorized use and/or duplication of this material without written permission from tellybest.com is strictly prohibited.
Cached Saved on: Sunday 1st of November 2020 04:19:17 AM