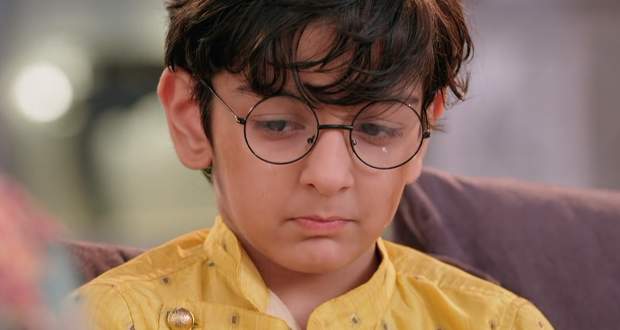 Today's Yeh Rishta Kya Kehlata Hai (YRKKH) 3 Nov episode starts with Suhasini getting worried for the kids. Kartik and Naira return there crying while the truck driver also arrives there.

Naira and Kartik meet Kairav and ask if he is alright. They meet Akshara as well and learn that she isn’t responding.

Kairav rushes inside while the whole family gets worried. Kairav recalls the importance of Ganga water from Suhasini and Naira and decides to use it on Akshara.

He rushes outside while Kartik and Naira are about to leave for the hospital. Kairav puts the holy water on Akshara and requests her to wake up.

Kartik witnesses this while the whole family is relieved. Naira and Kartik search for Kairav while Kairav is sitting in the corner crying.

Krish and Vansh go to meet him and try to console him. They further blame Krishna for everything as they planned to throw her out of the house.

Krishna gets shocked to overhear this. Later, Kairav comes downstairs and recites the whole story in front of everyone.

Kartik consoles Kairav and Naira ask him why he did it. Kairav reveals that he did it to throw Krishna out of the house. Kartik and Naira get really upset with Kairav.

Vansh and Krish also get scolded while Naira suggests sending Kairav to the hostel. Kartik and Naira refuse to forgive Kairav and asks him to apologize to Krishna.

Krishna decides to save Kairav and lies that she knew Akshara was on the truck. She also suggests that she wanted Kairav to get scolded.

Suhasini gets another point to scold Krishna and puts all blame on Krishna.

Upcoming YRKKH episode update: Kartik and Naira tell all the kids to stay away from Akshara.

© Copyright tellybest.com, 2018, 2019, 2020. All Rights Reserved. Unauthorized use and/or duplication of this material without written permission from tellybest.com is strictly prohibited.
Cached Saved on: Monday 30th of November 2020 10:55:24 PM