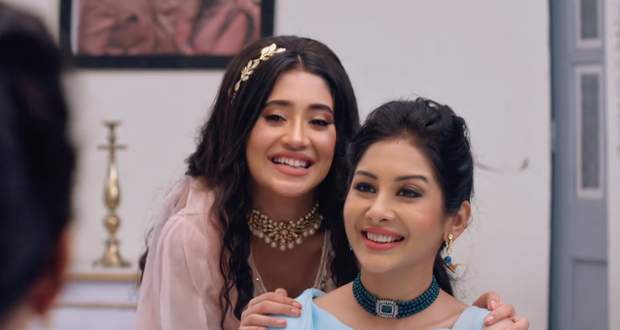 Today's YRKKH 5 Aug episode starts with Gayu and Samarth coming to Goenka house late at night. Everyone gets worried and asks about their sudden arrival.

Samarth reveals Gayu’s doctor was virus-positive and they got Gayu tested as well. Gayu’s report was negative but they still wanted to be with the family.

Kairav has sent a gift for Naira which says he misses his parents. Kartik and Naira get upset and miss their son. Kartik promises he will bring Kairav back soon.

In the morning, Naira brings tea for Gayu while Gayu wants to know if she is planning another child. Naira decides to throw a baby shower for Gayu.

Kartik gets a call from the investigator stating he has found a lead. Kartik refuses to listen to him as he gets disheartened each time. Naira tells Kartik about her idea of a baby shower and he also gets excited.

Suhasini asks Suvarna and Surekha to take care of Gayu. They both fight over the responsibility while Naira proposes to keep a baby shower for Gayu.

Suhasini refuses to allow the function while Samarth supports her. Gayu gets upset listening to this while Naira tries to cheer her up. Naira asks her to get ready for the pictures.

Gayu is surprised by the baby shower while Kartik again gets a message from the investigator. Naira asks Gayu to write a wish for the baby. Kartik also decides to make a wish for her daughter and writes something on the paper.

He burns half the paper and later gets a call from the investigator again. Naira reads the half-burnt paper and gets shocked.