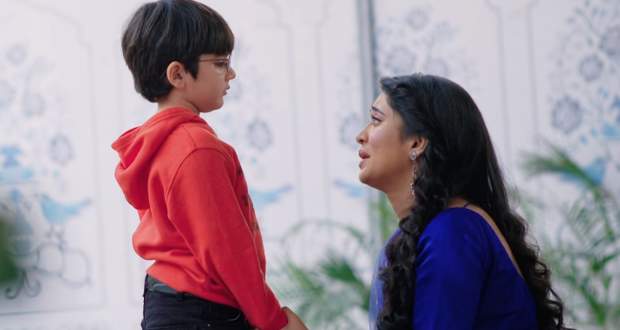 Today's YRKKH 5 Mar episode starts with Naira getting mad at media for asking such questions from a small kid. She further gets mad at the Goenka family and decides to take Kairav along.

Jhaberi is amused with Naira’s courage and strength but is adamant to win. Meanwhile, Kartik and Naksh find the video footage and Kartik informs Naira.

Naira tells him the story of Kairav and they also find the video going viral. Later, Manish also watches the video and gets upset as he doesn’t want to hurt Kartik and Naira.

Someone takes the picture of Kartik, Mohan, and Naksh and sends it to Jhaberi. Jhaberi decides to do something about Mohan. Elsewhere, Naira brings Kairav home but Kairav wants to go back.

Naira tells him the story about a small girl who ran away from home as she made a mistake. Bhabhi Maa reveals that the girl was his mother.

Naira says she returned to her home but it took time for her to be friends with her mother again. Naira asks if Kairav trusts her but he stays quiet and enters the house.

Kartik and Naksh are unable to find Mohan after he goes to visit his wife. Mohan is threatened and given money by a goon of Jhaberi. Kartik catches Mohan while a truck in speed approaches them and hits them.

Naira learns that Kartik has met with an accident and gets shocked. Naira rushes to the hospital while Jhaberi waits for his goons to call.

Upcoming YRKKH episode update: Naira takes Kartik inside the hospital while he wishes to meet Kairav.