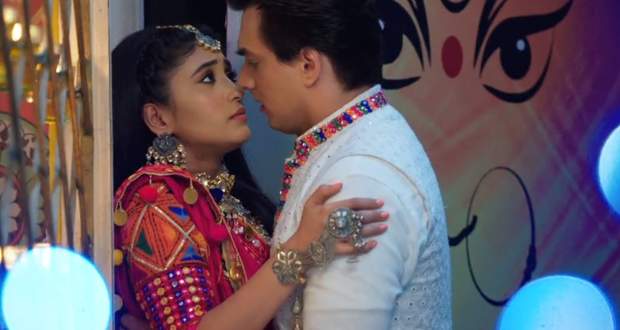 Today's YRKKH 5 Oct episode starts with Kartik informing Naira not to miss another hearing of the court. Naira tries to explain her situation while Kartik is not ready to listen.

Kartik’s lawyer wishes to meet Naira while Naira’s lawyer warns her of how clever Damini is. Later, some lawyers warn Damini of not getting into the Kartik-Naira case.

Vedika is guilty of her actions and wishes to tell Kartik the truth. Meanwhile, Naira leaves to meet Damini while Kairav hides in the car.

Naira reaches court and is about to meet the lawyer when she sees Kairav hiding behind the car. She starts acting weird and says to take her pictures.

Damini gets shocked to see her sudden change of mood while Naira shows Kairav to Kartik in a mirror. Later, Kartik and Naira want their families to come to the citizen club for Kairav.

The two families reach the citizen club for Dandiya night and Kartik gets stunned after seeing Naira dressed beautifully.

Later, Vedika gets upset to see Kartik and Naira dancing together. She learns about current in some pole and tries to tell her family.

Kartik takes Naira in a corner and informs about her dress string being open. They share some romantic moments and relive their old memories.

© Copyright tellybest.com, 2018 & 2019. All Rights Reserved. Unauthorized use and/or duplication of this material without written permission from tellybest.com is strictly prohibited.
Cached Saved on: Tuesday 4th of August 2020 11:52:43 PMCached Disp on: Thursday 6th of August 2020 03:01:47 PM