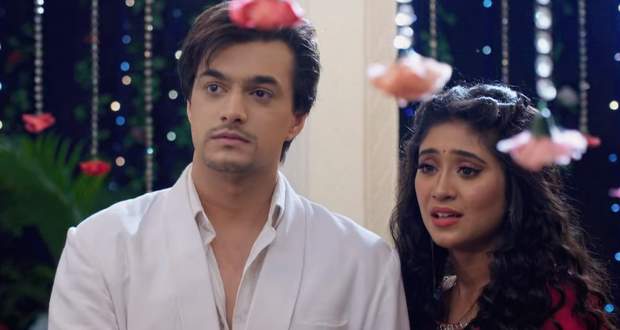 Meanwhile, the nurse notices a moment in Trisha but they decide not to inform. She also speaks a few words but the nurse doesn’t listen to it.

Naira and Kartik reach a beautifully decorated site and they both spend some special romantic moments. They also dance to celebrate their anniversary.

Next morning, Naira keeps her phone for charging while Luv and Kush pick up the call. It is from the hospital and they learn that Trisha is gaining consciousness.

Kartik and Naira have learned that Trisha is gaining consciousness and are on their way.  Meanwhile, Luv and Kush enter the room and try to talk to Trisha.

At the same time, Naira and Kartik arrive at the hospital and Abhishek escapes. Luv accidentally breaks Trisha’s oxygen pipe and her condition starts deteriorating.

Later, Luv and Kush hide while Kartik and Naira find Trisha in critical condition. The doctor is also unable to fix the pipe and calls another doctor.

Kartik tries to investigate and gets angry upon learning that CCTV cameras are not working.

Upcoming YRKKH episode update: Trisha is brought home while Suhasini is not happy with it.

© Copyright tellybest.com, 2018 & 2019. All Rights Reserved. Unauthorized use and/or duplication of this material without written permission from tellybest.com is strictly prohibited.
Cached Saved on: Wednesday 8th of April 2020 08:29:56 AM