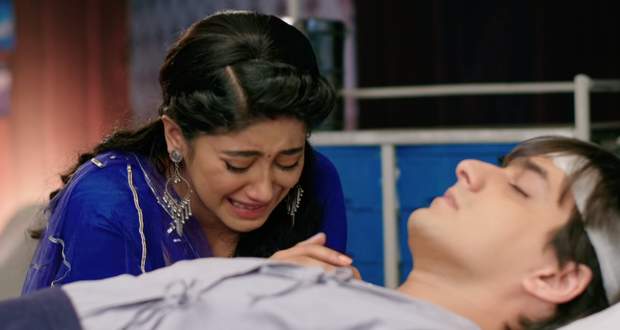 Today's YRKKH 6 Mar episode starts with Naira reaching the hospital and getting Kartik inside on a stretcher. Kartik keeps asking for Kairav while Naira gets disturbed with his condition.

Jhaberi gets mad at the truck driver for hitting Kartik. Manish overhears him talking to someone and asking them to go out of the city.

Later, the Singhania family and Kairav are informed of the accident while Naira calls Manish and tells him about the accident. Jhaberi asks Manish and Goenka family to not go while they ignore him and leave.

Kairav is waiting outside in the car and wonders who is in the hospital. Later, the Goenka family reaches the hospital and assures Naira that Kartik will be fine.

Naira asks to meet Kartik and blames herself for his condition. She gets really disturbed while Kairav arrives at the same time in the hospital and sees Kartik.

Meanwhile, Gayu is disturbed and gets into an argument with Samarth regarding the case. Elsewhere, Suhasini blames Naira’s decision for Kartik’s condition.

Naira is upset and is ready to give up but asks god to recover Kartik. Kairav comes to console Naira and says he will always stay with her and Kartik.

Suhasini blames Trisha for putting Kartik and Naira in trouble. She further calls her selfish and blames her for causing problems in their lives.

Shivani comes in the hospital and reveals that Jhaberi is responsible for Kartik’s accident. Naira decides to get him punished and fight the case.