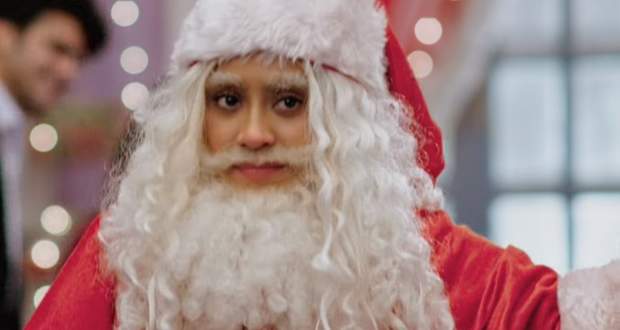 Today's YRKKH 7 Jan episode starts with Vedika wondering if she will get exposed while meeting the secret person. She asks Kartik what dress to wear and also tells him about Naira not coming.

Kartik says yes to whatever she says. Later, Kartik gets happy to meet Kairav and later thanks Vedika for the wonderful arrangement in such a short time.

Naira is adamant to expose Vedika’s truth while Vedika is happy that Kartik has accepted her. Later, Suhasini praises Vedika for her effort while Kairav misses his mother.

Kartik also decides to wish for Naira from Santa but stops himself thinking about Vedika. Meanwhile, Naira gets worried as her bag gets exchanged.

Vedika is scared to meet Umesh Gupta while he arrives at the same time. Suhasini is waiting for Naira while she arrives dressed as Santa.

Naira can see Kartik’s sad state and also gives chocolates to the kids. Meanwhile, Vedika asks Umesh Gupta to meet in the back and Naira also follows them.

Naira reaches their old room while Kartik also feels Naira’s presence around. Later, Naira finds Vedika with Umesh Gupta who is talking about operation and medicines.

Pallavi is also involved in the whole scene and Naira clicks a photograph of Umesh. Naira bumps into Kartik and falls into his arms while Vedika is suspicious if Santa is Naira.

Vedika rushes to expose Naira but it is Suhasini who is wearing Santa clothes now. Naira follows Umesh Gupta but he leaves in a car.

Upcoming YRKKH episode update: Naira learns that Umesh Gupta has given a kidney to her.

© Copyright tellybest.com, 2018 & 2019. All Rights Reserved. Unauthorized use and/or duplication of this material without written permission from tellybest.com is strictly prohibited.
Cached Saved on: Thursday 30th of January 2020 05:43:37 PMCached Disp on: Thursday 20th of February 2020 09:32:37 AM