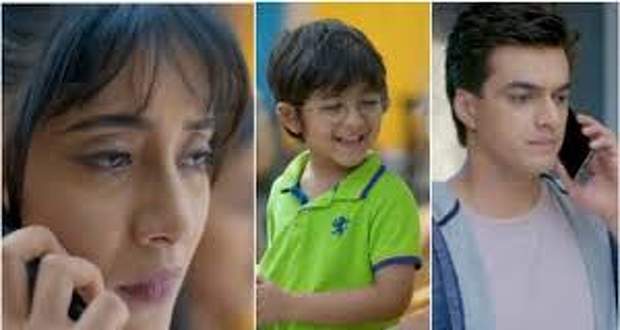 Today's YRKKH 8 Jul episode starts with Kairav getting upset because Kartik did not meet him when he went to the hotel. They think that Kartik left from there.

Naira (Tina) tries to cheer up Kairav. Suhasini thinks that now Kartik and Vedika will get married soon as she sees Vedika happily talking to Kartik over the phone.

Kartik decides to meet Kairav at his school, whereas Naira plans to give a surprise to Kairav for making him happy.

When Naira is going to meet Kairav at the same time Kartik also reaches school and Kairav becomes happy. Kairav and Kartik spend some quality time, and Naira is watching them from a distance. Later on, Naira requests Kartik to drop Kairav at home over the call.

Kartik says to Lisa that Kairav's mother is careless because she did not come to school to pick Kairav, and maybe Kairav is missing his father that is why he left home earlier.

Kartik feels a connection with Kairav and asks Lisa to tell Naira that she must tell the truth to Kairav as he can't act anymore.