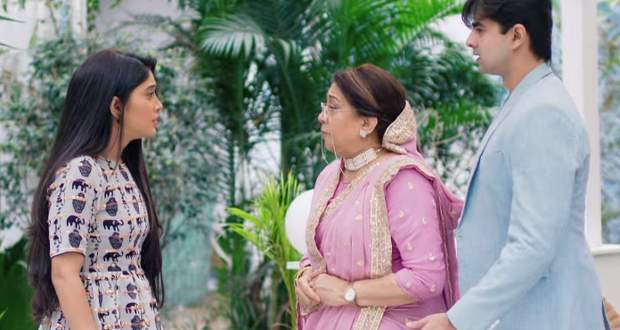 Today's YRKKH 9 Jan episode starts with Vedika declaring they are going for a honeymoon. Naira asks if Vedika can afford the exertion as she is also operated.

Vedika says she is fine and has asked Pallavi. Meanwhile, Naksh confronts Suhasini about doing injustice with Naira. Suhasini tries to explain her part and wishes to meet Naira.

Suhasini explains everything to Naksh and at the same time, Naira arrives. Naira tells the whole truth to both of them and Suhasini wants to confront Vedika.

Naira says they don’t have any proof and nobody will believe them. Naira further reveals that they have to do something soon as Vedika is taking Kartik for a honeymoon.

She asks Suhasini to take Vedika for sonography in another hospital. Naira also reveals that she has sent Kairav with Kartik to Goenka house.

Later, Kartik thinks Vedika has a problem with Kairav living with them while Vedika wants Kartik to be with her fully. Kartik says he can’t be emotionally with her always.

Vedika is torturing Kartik but Kairav tries to cheer him up by hugging him and dancing with him. In the morning, Suhasini accompanies Vedika and Kartik to the temple.

Meanwhile, Naira and Naksh reach the sunshine hospital. At the same time, Suhasini shows her worries for Vedika and wants her to get her check-up done.

Upcoming YRKKH episode update: Naira and Suhasini get shocked to learn that Vedika has one kidney.

© Copyright tellybest.com, 2018 & 2019. All Rights Reserved. Unauthorized use and/or duplication of this material without written permission from tellybest.com is strictly prohibited.
Cached Saved on: Thursday 30th of January 2020 04:35:38 PMCached Disp on: Tuesday 18th of February 2020 11:46:50 AM