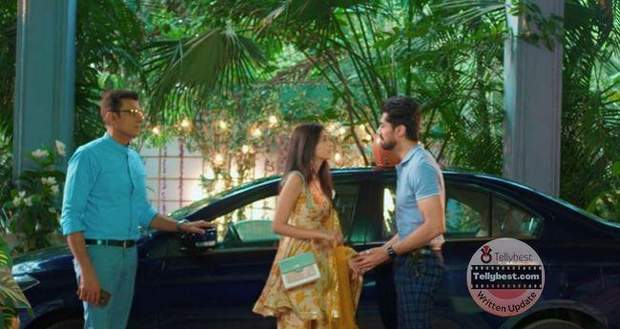 Today's Yeh Rishta Kya Kehlata Hai (YRKKH) 10th December 2022 episode starts with Akshara telling Aarohi to be careful while walking as anything could have happened.

She walks away with a hand on her stomach while Aarohi wonders if Akshara is pregnant.

Just then Neil comes to her and affirms her suspicions.

After a while, Manjari tells Swarna that this happy news has come with tension and they do not know how to deal with it.

Manish suggests respecting the children's wishes in that while Manjari thinks that as their elders they should advise children so they can take better decisions.

Meanwhile, Manish tells them that he is with Abhimanyu as nothing is more important than Akshara’s life.

Harshvardhan wants Abhimanyu to at least consult a doctor to get a clear picture of it.

Elsewhere, Aarohi is in shock and asks Neil about the complications that Akshara has while Neil tells her that this is what is keeping them from celebrating the happiness.

Later, Aarohi changes her mind about telling Neil about the false alarm so that all the attention does not get diverted to Akshara.

Meanwhile, Manish comes to Abhimanyu to help him with his decision and share his grief.

In the meantime, Swarna and Manjari are with Akshara who wants to consider the options.

Swarna tries to make Akshara understand Abhimanyu’s point of view as making a decision for him is not easy as well but necessary as he himself is a doctor.

Meanwhile, Abhimanyu tells Manish that he was not able to express his happiness to Akshara for fear of losing her.

In the meantime, Akshara tells them that there is always a risk in pregnancy but people do not stop with that and there is something called hope that people should pay attention to everything.

Later, Manjari stops Abhimanyu from taking the appointment for the procedure telling him that a mother becomes more powerful internally to protect her child.

Manjari also tells Abhimanyu that she also had complications during her pregnancy and doctors were hopeless and yet her belief in God and herself paved the way.

Abhimanyu tells them that despite all the arguments he cannot imagine losing Akshara and they will have to get done with the procedure as soon as possible because the complication will continue to get complicated with each passing day.

Just then Akshara comes there and tells Abhimanyu that she cannot go through with this procedure.

Abhimanyu tells her that he understands that she is scared but he is there with her at every moment and will share her grief too as the pain is mutual for them both.

Abhimanyu tells her that her life is not hers alone that he cannot live without her and that everything will be ruined if anything happens to her.

Late at night, Abhimanyu and Akshara mourn the loss of the child that they would never have.

The next morning, Manjari stands praying for Abhimanyu and Akshara hoping for some kind of guidance.

At the hospital, Abhimanyu and Akshara walk towards their fate with laden feet.

Akshara keeps looking at Abhimanyu hoping for him to change his mind.

With shaking hands, Akshara enters the procedure room while Abhimanyu waits outside.

Meanwhile, the doctor asks Akshara if she is ready and Akshara tells her that she will have to go through the procedure whether she is ready or not.

After a while doctor comes out and tells Abhimanyu that Akshara wants to talk to him.

© Copyright tellybest.com, 2022, 2023. All Rights Reserved. Unauthorized use and/or duplication of any material from tellybest.com without written permission is strictly prohibited.
Cached Saved on: Wednesday 25th of January 2023 01:11:22 PMCached Disp on: Wednesday 1st of February 2023 08:29:35 PM