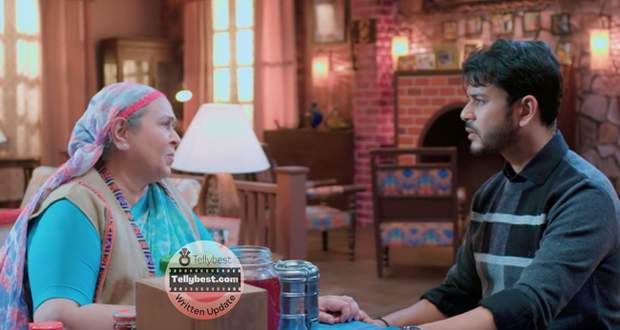 Just then Manjari comes out and stops seeing Kairav.

Kairav's sarcasm makes Abhimanyu tell him that he should not ignore Ruhi because of him.

Kairav gets angry and tells him that he is one doctor who lives in God Complex.

He blames Abhimanyu for ruining both his sister's life.

Just like Akshara, he is ruining Aarohi’s life who deserves love in life.

He tells her that he has bound Aarohi because of his promise to Neil and until he is ready to face his insecurities, he better not lecture him about his responsibilities.

Elsewhere, Neelam Amma tells Abhinav to let love come into their life as well and make his relationship with Akshara real.

Abhinav recalls the days when Abheer came into this life and Akshara asks him to become Abheer’s father seeing his loving side and his love and care for Abheer.

Abhinav tells Neelam Amma that he is happy to have a family and can live life without love.

He reminds Neelam about Akshara’s condition of never being able to live life as husband and wife.

However, Neelam Amma continues to pester him and asks him if it is not possible that he never felt love while living together for so many years.

Later, Abhinav comes out to find Abheer washing his car.

Abheer apologises to Abhinav for misbehaving with him while Abhinav happily hugs him and together they wash the car.

Later, Akshara asks Abhinav if he is happy in his life while living a half-life as a father as he has gotten nothing out of this deal.

However, Abhinav tells him that he has so much, a son to call him father, his faith, a friend who looks after him and above all a family that he always wanted.

Elsewhere, Manjari comes to Abhimanyu who is checking Ruhi’s homework.

Manjari tells him that Kairav’s words were bitter but true and he should think of marrying Aarohi so that they can become each other’s companions.

Abhimanyu gets irritated and walks out from there only to find Aarohi standing outside.

Abhimanyu arrives at a club to perform as a standup comedian and introduces himself as a heart surgeon.

Abhimanyu jokes about Heart and tells them what would doctors name the Bollywood pictures.

He also hides behind his jokes and tells the audience that the most common disease in the heart is ‘Heart Break’.

Talking about heartbreak brings tears to his eyes.

He also jokes about the family’s solution to marry the person who has some problem.

According to them, Marriage is multivitamin that cures everything.

He also tells the worst reason for getting married is to marry because someone else has married.

However, he ends his standup by telling people to never fall in love as love should come with a warning like ‘Love Causes Heartbreak’.

© Copyright tellybest.com, 2022, 2023. All Rights Reserved. Unauthorized use and/or duplication of any material from tellybest.com without written permission is strictly prohibited.
Cached Saved on: Wednesday 25th of January 2023 10:14:34 AMCached Disp on: Sunday 5th of February 2023 04:33:20 AM