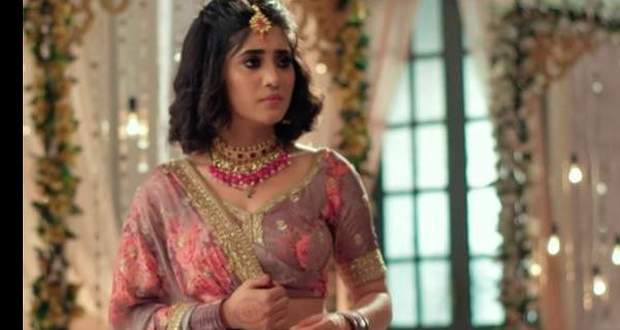 Kartik goes to prepare the projector for his surprise while Ranvir feels uneasy but hides it seeing Sirat.

Kartik notices the photographer hindering with the laptop and beats him to learn that Chauhan wanted him to show his and Sirat's pictures to everyone.

Ranvir goes to the bathroom coughing and realizes that he is coughing up blood but hides to not spoil the marriage atmosphere.

Sirat looks for Ranvir and bumps into Kartik while the sponsor comes there and says that he is going to take his leave.

Ranvir calls his doctor and sarcastically asks him why he is coughing up blood but the doctor ignores it and tells him gets some tests done.

Kartik confronts Chauhan about his wrongdoing and rebukes him while Chauhan questions his and Sirat's relationship.

Elsewhere, Sirat gets worried about seeing blood and asks Ranvir about it but he lies that Sindoor fell on him.

© Copyright tellybest.com, 2020, 2021. All Rights Reserved. Unauthorized use and/or duplication of any material from tellybest.com without written permission is strictly prohibited.
Cached Saved on: Friday 21st of January 2022 03:49:28 PM