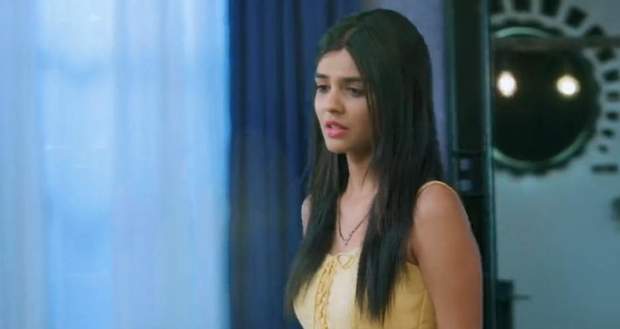 Abhimanyu treats her rudely and goes to sit away from her.

Akshara feels sad and sings a song for him.

The next morning, Akshara is sleeping on the sofa with Abhimanyu and Abhimanyu talks with her groggy with sleep.

After a while, he remembers everything and goes away from her feeling embarrassed.

Outside Abhimanyu observes Manjari crying for Neil in front of her Lord.

Meanwhile, Akshara also performs a veneration of Lord Shiva and asks for strength to deal with the circumstances.

Just the Abhimanyu also comes in and joins her in doing veneration.

In the meanwhile, Mahima rudely talks with Harshavardhan while Anand tells him that this problem should have died instead of becoming big and now people will question him.

Elsewhere, Abhimanyu is with Manjari trying to convince her for breakfast while Akshara also comes in and tells Manjari to eat as she will have to keep up her strength in waiting for Neil whereas Manjari thinks of Neil and whether he has eaten anything or not.

On the other hand, Neil is being served breakfast and thinking of Manjari and Abhimanyu.

Swarna feeds Neil with her own hands.

After a while, Abhimanyu asks Manjari to eat something and Akshara shows her the pic of Neil eating breakfast.

Just then Harshvardhan comes to the breakfast table and everyone leaves to ignore Harshvardhan.

Anand tells him about an imminent board meeting in one hour.

Meanwhile, Aarohi poisons Neils's mind against the Birlas saying she has gone through the same situation due to Akshara.

Akshara calls her Dadi to ask to do something and she tells her to perform a Havan.

Later, busy Birlas are discussing the board meeting while Abhimanyu tells them that he needs to go take care of Manjari and cannot go with them.

Just then, Manjari comes down to get ready to do Hawan and is surprised to see that everything is already arranged.

Abhimanyu goes to change his clothes but could not find them when Akshara comes in and tell him that it is difficult to see clearly when a person is angry.

© Copyright tellybest.com, 2020, 2021. All Rights Reserved. Unauthorized use and/or duplication of any material from tellybest.com without written permission is strictly prohibited.
Cached Saved on: Sunday 2nd of October 2022 02:26:01 PMCached Disp on: Friday 7th of October 2022 09:44:28 PM