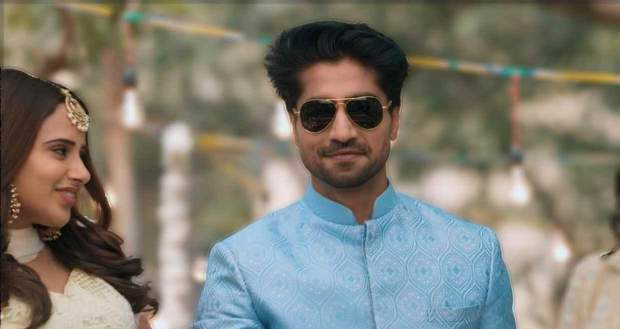 On seeing Arohi a bit sad, Manish gives her a hug comforting her for seeing her love, Abhimanyu with her sister.

Arohi cheers up and comes to the function arena with Akshara from upstairs.

On seeing Akshara dazzled up, even at the second time, Abhimanyu dazes in awe observing the beauty of Akshara.

However, Suhasini asks Akshara to go back inside as they have some rituals to do with Abhimanyu.

Abhimanyu and Akshara deny in unison which sparks laughter among the family members.

Suhasini announces that they have to tie a thread around the wrist of the groom’s father but Harshvardhan is nowhere to be seen.

Hearing this, Akshara gets sad seeing Manjari hide her sorrow.

Meanwhile, Harshvardhan eagerly waits for the photos of the function so that he can see Abhimanyu.

He talks to himself conveying his sadness, thinking that no one cares about his presence in the function.

However, Harshvardhan gets shocked to see Akshara there who went to bring him to the function.

Akshara requests Harshvardhan to attend the function for Abhimanyu and Manjari’s sake but Harshvardhan refuses.

On the other hand, Suhasini asks Arohi and Kairav to bring Akshara when Akshara appears with tears in her eyes.

Seeing Akshara like that, Abhimanyu and others rush to her asking what the matter is.

Akshara announces that she has brought a member and Harshvardhan appears from behind her surprising everyone.

Manjari and Abhimanyu thank Akshara for bringing Harshvardhan and the function of tilak starts full-fledged.

Interrupting the start of the ritual, Neil announces that Akshara and Abhimanyu have to play a game against each other.

Akshara challenges Abhimanyu to make him lose while Abhimanyu gets competitive.

However, Abhimanyu fails to win the game as his shots miss Akshara who instantly dodges them.

Akshara teases Abhimanyu while the Goenkas rejoice in Akshara’s victory.