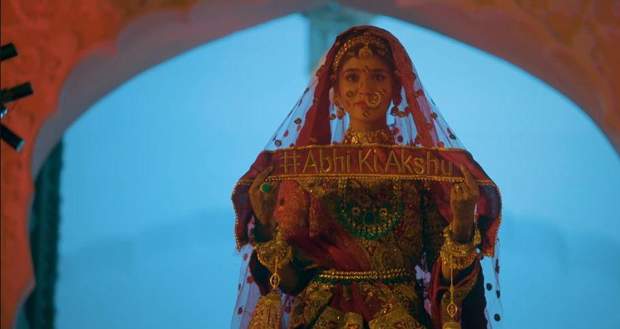 Just then Mahima gets a message about a conference in Chicago but is disappointed to know that invite is for Abhimanyu and Akshara.

Meanwhile, Abhimanyu tells the Panditji to properly pronounce the Mantras so that he can understand the meaning.

Vansh, Aarohi and Reem go to find Akshara’s sandals. Neil comes to tease Aarohi and shows her Akshara's sandals that he was wearing.

Panditji calls Akshara’s parents which makes Akshara and others gloomy with remembrance.

Later, Kairav comes forwards to perform the ritual while Akshara looks at him gratefully and tells the Panditji that Kairav has been performing the duties of her parents ever since their death.

After a while, Panditji asks Abhimanyu and Akshara to stand up for ‘Pheras’ while Dadi, Swarna, Manjari, and Manish explains one ‘Phera’ after another and AbhiRa absorbs the meaning of each Phera as they take it.

As Panditji asks Abhimanyu to come forward for the fourth ‘Phera’, Abhimanyu asks him to let him be behind.

Everyone laughs at Abhimanyu’s demand and Manjari tells Abhimanyu to follow the instructions.

Later, Abhimanyu performs the ‘Sindoor Daan’ and Abhimanyu signals Akshara to do the same to him.

After tying the Mangal sutra they stand up for the ‘Sampadi’ ritual in which the bride and groom will press the 'Akshat's pile' and makes silent promises to each other while Dadi explains its meaning.

Akshara and Abhimanyu look delirious after completing the ritual and look at each other with love and devotion.