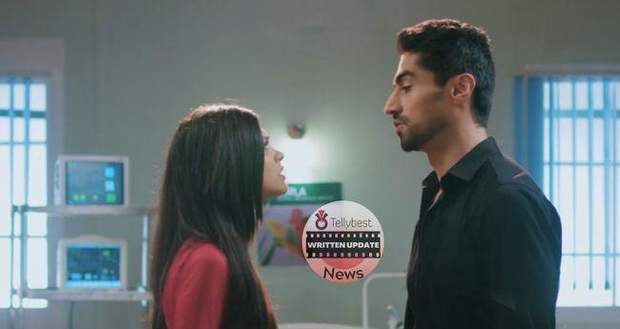 However, Neil is worried about Aarohi’s gift that he has misplaced and searches Abhimanyu's car.

Abhimanyu tells him to not irritate him as he is already worried.

Neil asks him if he is worried about going to Mumbai.

Just then, Akshara’s hallucination tells Abhimanyu to not go to Mumbai or else they will not be able to have any more chance meetings and will starve to see each other.

Later, Abhimanyu stops the car and sees Akshara dance and Music academy board on a building while she decorates it to be inaugurated.

Abhimanyu feels happy to see Akshara move on and tells Neil that he is all sorted and does not need to concern himself with her.

At the hospital, Abhimanyu is talking to Manjari about taking her to Mumbai when Akshara barges in looking harassed and asks Abhimanyu to not take Manjari away from her family because of their problems.

Abhimanyu turns his face in anger but later realises that Akshara's presence was just his imagination.

He curses Akshara for not leaving him alone and always being with him either in his dreams or imagination.

Meanwhile, Akshara is sitting in Harshvardhan’s room agreeing to do music therapy but on the condition that Abhimanyu should not find out about it.

After a while, Harshvardhan smuggles Akshara to Manjari’s room through a Gynae ward as Abhimanyu does not venture to this side.

Later, Abhimanyu sees Akshara standing in the Gynae ward and assumes her to be his imagination and feels frustrated at not being able to let go of her.

After a while, Akshara is in Manjari’s room giving her music therapy while Harshvardhan stands guard outside the door and admires Akshara’s dedication towards Manjari.

On the other hand, Abhimanyu cannot shake away the feeling of Akshara’s presence in the hospital and tells himself to focus.

Later, Harshvardhan confronts Abhimanyu and calls him a coward for running away from Akshara.

Harshvardhan tells him that he cannot take Manjari away from there as it will not be good for her.

Akshara overhears Abhimanyu and tells him that he cannot take Manjari to Mumbai.

Abhimanyu makes fun of Akshara and Harvardhan and tells them that they have no right to interfere in his matters.

Later, Abhimanyu angrily resolves to take Manjari to Mumbai at all costs.

In the meantime, Akshara comes crying to Manish and Suhasini about Abhimnayu taking Manjari to Mumbai.

Manish does not approve of Akshara helping the ungrateful Birlas.

However, Akshara tells him that she cannot afford to let go of her mother again and resolves to keep Manjari here.

Kairav is also shocked to hear about Abhimanyu’s plan to move to Mumbai.

Meanwhile, Abhimanyu finds out about Neil's affair and advises him to not commit to it until he is sure.

Neil tells him that no one can be hundred per cent sure about emotion as it is meant to be lived and experienced.

© Copyright tellybest.com, 2022, 2023. All Rights Reserved. Unauthorized use and/or duplication of any material from tellybest.com without written permission is strictly prohibited.
Cached Saved on: Monday 21st of November 2022 07:30:59 AMCached Disp on: Monday 5th of December 2022 12:05:22 AM