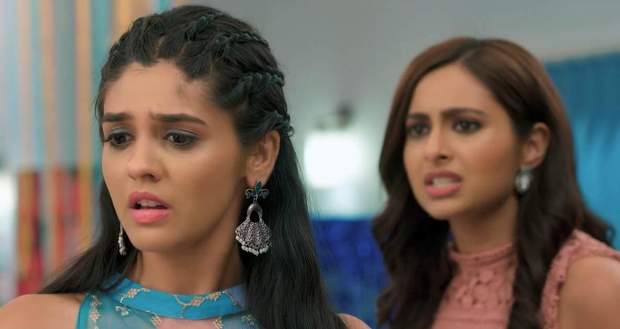 Today's Yeh Rishta Kya Kehlata Hai (YRKKH) 11th April 2022 episode starts with Abhimanyu telling Akshara about the blurred video of the accident and asking her to not tell anything to Manjari.

Before Akshara could tell Abhimanyu, Kairav comes in asking Akshara about her health.

Akshara asks to be taken to Aarohi and Abhimanyu complies.

Afterwards, Abhimanyu leaves her with Aarohi so that they both can be comfortable together.

In the meantime, Aarohi opens her eyes and worriedly asks Akshara about telling Abhimanyu.

Akshara remains quiet while Aarohi recalls fainting and cries in fear of being hated by her family.

Akshara tells her that she hasn’t told anyone anything and Aarohi once again asks her not to tell anyone.

Meanwhile, Abhimanyu is assuming things about Aarohi and is ready to defend Akshara.

As Aarohi is requesting Akshara, Abhimanyu comes in which quietens them.

On the other hand, Birla’s are expressing their resentment at Abhimanyu for inaugurating a new department without discussion while Goenka's are surprised at their resentment.

Akshara tells Abhimanyu that they were merely having a fight, which makes Abhimanyu angry and asks Aarohi to rest.

He is about to say something to Akshara when some work comes in taking Abhimanyu away.

Hearing the door open, Akshara assumes it to be Abhimanyu and tells everything about the accident but it wasn’t Abhimanyu but Mahima.

Mahima is shocked to hear Akshara’s confession but remains quiet and leaves.

Not finding anyone behind the screen, Akshara goes to find him but he is in Operation Theatre, which further worries her.

Mahima finds Akshara waiting outside the operation theatre while Harshwardhan comes calling her.

Later, Akshara tells Aarohi that she has told everything to Abhimanyu, which makes Aarohi miserable, while Kairav comes to take Aarohi and Akshara home.

Akshara tells Kairav to go and she will come later.