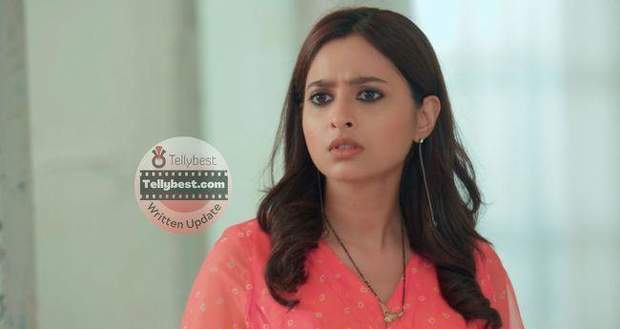 Today's Yeh Rishta Kya Kehlata Hai (YRKKH) 11th December 2022 episode starts with Abhimanyu coming to Akshara who tells him that she wants to hear the child’s heartbeat once with him.

Abhimanyu obliges Akshara and uses the ultrasound machine to hear it.

However, Abhimanyu’s facial expressions change from pain to shock seeing the monitor.

Akshara gets worried and asks Abhimanyu what is wrong.

Meanwhile, Abhimanyu tells him that there are two heartbeats. and hearing that Akshara begins to cry.

In the meantime, Birlas are waiting in anticipation for AbhiRa’s return.

Just then Goenkas arrives at the Birla's house worrying about Abhimanyu’s call.

At the same time, Baloon begins to fall inside the house from everywhere and Abhimanyu and Akshara come there and tell them that they have decided to keep the babies.

Everyone becomes happy with joy and congratulates them.

Just then Manish realises that there are two babies and his happiness double.

Meanwhile, Aarohi is not happy to hear the news as she is in jeopardy.

After a while, Manjari asks Abhimanyu about Akshara's health and how did he change the decision.

Abhimanyu recalls his conversation with Akshara where she told him to think like a father and not as a doctor.

Akshara assures him that they will be very careful with the baby and her health and that it is a blessing from God and they cannot ignore them.

Abhimanyu is scared to take the risk but Akshara convinces him by saying she promises to take very good care of herself and nothing will go wrong.

Abhimanyu tells her that although he is agreeing to try but he will never be able to forgive himself if anything happens to her.

Coming back from the recollection, Akshara also tells Manjari that they will not be taking any chances with her health.

Abhimanyu also tells them that they have also consulted the best doctor who has given them loads of instructions to follow but they will follow everything to the T.

Afterwards, Swarna, Manjari and Suhasini perform the Aarti and ward off the evil eye from AbhiRa.

Later, Birlas and Goenkas talk separately to their children.

Suhasini presents Akshara and Aarohi with their mother’s belonging so they can feel their presence with them.

Meanwhile, Manjari expresses her happiness to Abhimanyu and Neil.

In the meantime, Manish asks Akshara and Aarohi to join hands together and becomes friends instead of nemesis.

Manjari also tells Abhimanyu and Neil to forget all the past day's problems and move on as one so their future happiness remains and is never compromised.

Both Neil and Abhimanyu promise to never fight again and will always be there for each other.

At the same time, Akshara and Aarohi also promise Manish that they will be friends from now on.

© Copyright tellybest.com, 2022, 2023. All Rights Reserved. Unauthorized use and/or duplication of any material from tellybest.com without written permission is strictly prohibited.
Cached Saved on: Wednesday 25th of January 2023 05:26:44 PMCached Disp on: Tuesday 31st of January 2023 06:57:01 PM