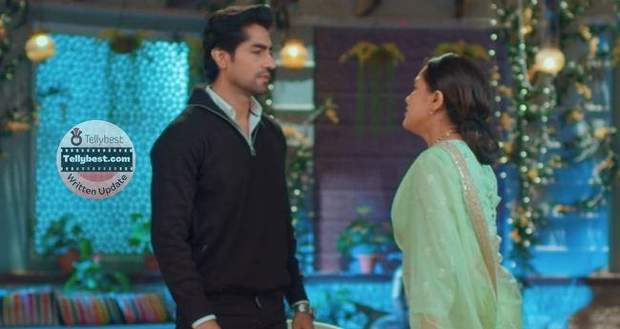 In the meantime, Abhimanyu is surprised to see Aarohi waiting for her and recalls Manjari’s demand.

Aarohi tells him that she is waiting for him to discuss some hospital requirements.

Abhimanyu asks her about her opinion of Manjari’s proposal but Aarohi tells him to not take these talks personally as her only priority after Neil is Ruhi and she is happy seeing Ruhi happy with her and Abhimanyu.

Meanwhile, Parth is practising his presentation and failing miserably.

Later, he tells Mahima that this is not his cup of tea and he will ask Abhimanyu to go in his place.

However, Mahima gets furious and tells him that he will do no such thing and treat this as an opportunity to prove his worth.

Meanwhile, Mahima warns Parth to not back out and also to mend his way regarding Shefali.

Parth looks furious and tells Mahima that he will deal with his matters but for now, he is not going to Shimla.

Abhinav tells her to not irritate her as he does not want to talk about anything on this matter.

However, she does not care for Abhinav’s loving rebukes and tells him to not wait for the right time but just go and confess her love for Akshara and that time will become the right time.

Meanwhile, Anand comes to Abhimanyu telling him to go to Shimla instead of Parth as Parth is too nervous to handle this responsibility.

He also emphasises the importance of this conference for Birla hospital and its reputation.

Just then Ruhi comes there asking Abhimanyu if he is missing his "Comportant classes” because of her.

Abhimanyu smiles at her mispronounced words and corrects her while Ruhi tells him to go and have an amazing trip.

However, Mahima gets angry at Abhimanyu for agreeing to Anand while refusing her before.

Meanwhile, Akshara is struggling to study law books while blabbering about too many courses when Abeer asks her if there is any law against too many studies for children.

Akshara rebukes him telling him that they both cannot afford to come second in their life.

He not only looks but feels scared about broaching the topic with Akshara.

Showing Akshara the gift, Abhinav looks for an opportunity to initiate the topic while Akshara gets busy with her work.

Abhinav struggles to tell Akshara in broken sentences while Akshara tells him to clearly speak.

Finally, Abhinav tells her that if she wants they can start their life as husband and wife.

Akshara jumps with happiness and tells him that she has been waiting for this opportunity.

Abhinav looks surprised at the unexpected response and is about to jump with joy when Akshara removes her earphones and tells Abhinav that they have finalised a deal with the farmers' market to put up a stall there.

Abhinav’s hope and courage die realising that Akshara did not hear anything he said.

Later, Abhimanyu picks up Rohan on the way and Abhi rains on Rohan's plans for a musical ride as he starts talking to Roohi preparing her for the exam.

Elsewhere, Muskaan tells Akshara and Abhinav about printing personalised stickers for the stall as there will be surgeons from all over India who will be given these jams as gifts.

Akshara’s heart sinks at the mention of surgeons and her suspicions confirms when he sees Abhimanyu’s name on the list.

As Abhinav asks Akshara to sit in the car, Akshara tells him that they are not going.

No one understands Akshara’s sudden refusal and labels it as anxiety but Akshara shouts in pain telling them all that they will not go to the farmers market.

© Copyright tellybest.com, 2022, 2023. All Rights Reserved. Unauthorized use and/or duplication of any material from tellybest.com without written permission is strictly prohibited.
Cached Saved on: Wednesday 25th of January 2023 09:37:06 AMCached Disp on: Monday 6th of February 2023 04:45:04 AM