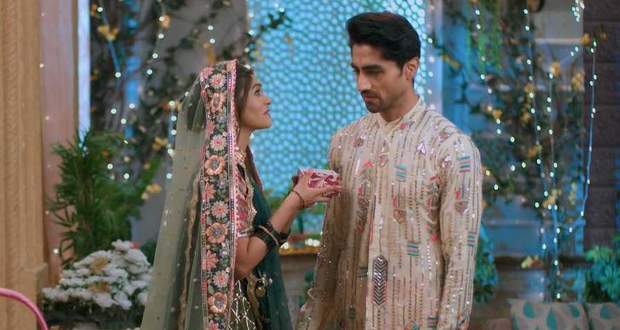 Today's Yeh Rishta Kya Kehlata Hai (YRKKH) 11th July 2022 episode starts with Akshara telling Harshvardhan that Abhimanyu is right and two people in marriage should celebrate their love for each other and if they do not feel anything then they do not need to show off anything for anyone.

Harshvardhan throws the veneration plate and its coconut is about to hit Manjari but Abhimanyu’s reflex saves her.

Harshvardhan says that it was unintentional however, Abhimanyu tells him that it does not matter whether he has done things intentionally or unintentionally but they had enough of his mood swings.

Later, Akshara comes to Abhimanyu with a platter of food and convinces him to eat.

Afterwards, Abhimanyu and Akshara discuss Manjari’s bold move and that they will always be with her.

On the other hand, Aarohi jokes about fasting while Goenkas looks worried for Abhimanyu and Manjari.

After a while, Harshvardhan comes to Manjari’s room and accuses her of gaining other people's sympathy and making him look villainous.

He also tells her that she purposely did not divorce him so that she can humiliate him at every turn.

He calls Manjari cunning and selfish who has been playing games with him for so long.

After venting his anger, Harshvardhan leaves the room.

Manjari immediately comes after him and calls Abhimanyu, Akshara and the rest of the family.

Abhimanyu worries for Manjari asking him if Harshvardhan has again said anything to her.

However, Manjari tells Abhimanyu that time for Harshvardhan to say anything is over and it's her turn to speak.

Manjari presents Harshvardhan with divorce papers saying that she has reached a decision where she does not want to stay married to Harshvardhan.

Abhimanyu feels happy at Manjari’s decision and tells Harshvardhan that Manjari will stay in the house and he can go anywhere he wishes.

Meanwhile, Goenkas are worried about Akshara and her family.

At Birla's house, Harshvardhan comes down with his suitcase, ready to leave the house.

Anand, Mahima, Parth and Neil try to stop him from leaving while Harshvardhan tells them he cannot tolerate more humiliation at Abhimanyu’s hand.

Abhimanyu is not ready to take the blame for Harshvardhan’s decision and tells him that he is using his choice in leaving the house as he has done on several occasions.

Harshvardhan explodes with anger and leaves the house.

After a while, Abhimanyu thinks about Manjari’s decision and how she has finally shown the courage to divorce Harshvardhan.

© Copyright tellybest.com, 2022, 2023. All Rights Reserved. Unauthorized use and/or duplication of any material from tellybest.com without written permission is strictly prohibited.
Cached Saved on: Wednesday 25th of January 2023 10:43:51 AMCached Disp on: Thursday 9th of February 2023 08:36:38 AM