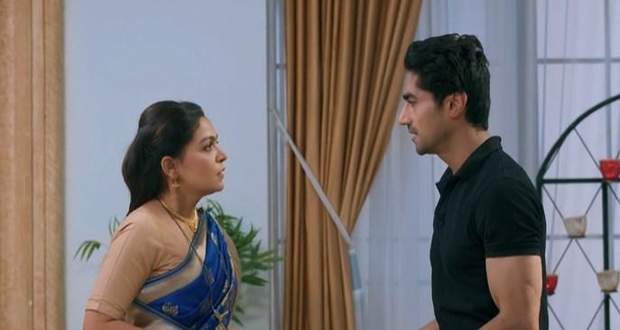 Today's Yeh Rishta Kya Kehlata Hai (YRKKH) 11th June 2022 episode starts with Abhimanyu searching for his clothes when Akshara comes in and hands over the clothes to him and tells him that with angry eyes nothing is seen clearly.

Meanwhile, Manish and Swarna are talking about the effect Harshavardhan's doing will have on the hospital while Kairav worries about Akshara.

Meanwhile, Akshara calls Neil and tells him about the great love of mother Yashodha's then mother Devki and asks him to come home for his mother Yashodha.

Abhimanyu overhears Akshara’s phone conversation and warns her of hurting Manjari in all these attempts.

Meanwhile, busy Birlas are in a meeting where the board of directors asks Harshvardhan to step down from his position as CEO on moral grounds.

Anand gets angry at them and threatens to leave the hospital along with Harshvardhan.

The board of directors tell them that if Manjari openly admits to forgiving Harshvardhan then his reputation can be salvaged.

Later, Harshvardhan asks Anand to talk to Manjari for giving a statement in his favour and reminds him that Birla Hospital is at stake.

In the meantime, Neil comes home by the time Havan gets over giving life to Manjari.

Aarohi is not happy with Neil's return but hopes that another storm is nearby to take away Abhimanyu’s peace.

Meanwhile, Harshvardhan tells them that it is very important to have control of the administration at hand.

Later, Neil apologises to Manjari while they all hug each other.

After a while, Neil asks Akshara about Harshvardhan and tells her that he still thinks that Manjari is wrong for not telling Harshvardhan from the beginning for it would have a very different effect on his personality.

In the meantime, Mahima calls Manjari to come to the hospital and to publicly forgive Harshvardhan.

Harshvardhan also manipulates Manjari into coming to the hospital.

Manjari decides to go for the sake of others as well as Abhimanyu.