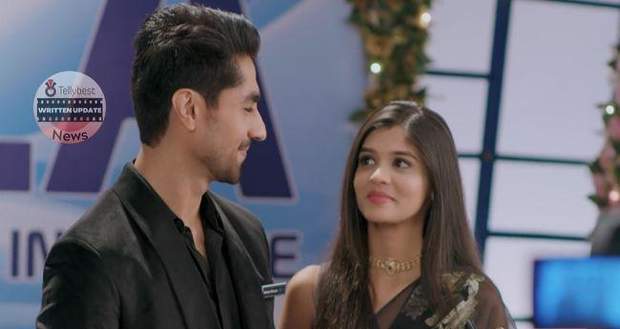 Today's Yeh Rishta Kya Kehlata Hai (YRKKH) 11th November 2022 episode starts with Manjari telling Abhimanyu to message Akshara to reach the venue while they go there by themselves.

Meanwhile, Akshara’s car gets punctured on the way.

Thinking to not disturb Abhimanyu into leaving the party Akshara decides to change the tyre herself.

On the other hand, Abhimanyu is enjoying the party but eagerly waits for Akshara.

Meanwhile, Mahima tells Aarohi that she will help her get close to Neil while she will have to do as she says.

As Akshara reaches the party, everyone has already gone and Abhimanyu is asleep on the table.

Akshara feels overpowering guilt for being late and wakes up Abhimanyu.

However, Abhimanyu does not make an issue out of it and tells her that there is nothing to worry about.

Seeing Akshara upset, Abhimanyu changes the subject telling Akshara that he is hungry.

Meanwhile, Manjari observes them from afar and looks angry at Akshara for not being there by Abhimanyu’s side during the whole party.

During dinner, Akshara keeps apologising to Abhimanyu by scribbling sorry on napkins while Abhimanyu assures her of his love.

Being engrossed in each other, they finished their dinner and then Abhimanyu admires Akshara who is looking beautiful in her dress.

Akshara blushes under Abhimanyu's scrutiny while Abhimanyu takes her in his arms to dance with her.

Meanwhile, Manjari is upset with Akshara and sympathises with Abhimanyu who has invited his friend to make him listen to Akshara's song.

Manjari feels sad for Abhimanyu who always ends up waiting for Akshara just like she use to do with her relationship.

Shefali tries to tell Manjari that Akshara and Abhimanyu’s relationship is not similar to hers and they have an understanding between them.

However, Manjari is not convinced and tells Shefali that the person who makes the most sacrifice in the relationship ends up suffering and she does not want Abhimanyu to suffer the same way.

In the meantime, Manish tells Aarohi about a new proposal and tells her to not hide anything from anyone while doing it.

Later, Akshara is thinking about Manjari’s comments when Abhimanyu comes to her and massages her hand which got sprained during tyre changing.

Akshara questions Abhimanyu if he thinks and feels that she does not love her the way she should.

However, Abhimanyu tells her that he trusts her implicitly and will never allow family matters to come between them.

Later, Abhimanyu tells Akshara to delete these negative thoughts or he will have to kiss them out of her mind which makes Akshara blush.

The next morning, Mahima sends Neil on an errand and informs Aarohi to be there to meet him.

Meanwhile, Akshara asks Manjari to trust her to take care of her relationship while holding the Pooja's thali which was about to fall.

Manjari tells Akshara that her experiences have taught her otherwise and she does not want Abhimanyu to suffer the same fate.

Akshara promises Manjari that she will never allow her fears to come true.

Akshara also tells her that she can say anything to her as she is her mother and she will never feel bad about it.

© Copyright tellybest.com, 2022, 2023. All Rights Reserved. Unauthorized use and/or duplication of any material from tellybest.com without written permission is strictly prohibited.
Cached Saved on: Monday 21st of November 2022 12:59:03 AMCached Disp on: Thursday 1st of December 2022 01:43:17 AM