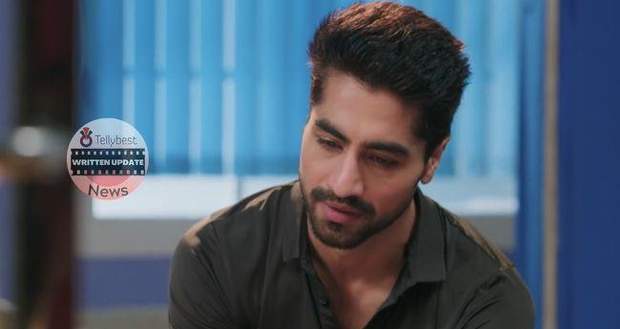 Neil also advises Abhimanyu to not take Manjari to Mumbai.

However, Abhimanyu tells him to let him decide in this matter as he knows best.

Neil tells Abhimanyu meaningfully that he will not support him in his decision nor will it make things right.

The next morning, Akshara expresses her surprise to see the sketches of Ravan lying on the table while Kairav tells them that on this auspicious day of Dusshera, it is better to burn the negative thoughts within themselves.

Just before leaving, Abhimanyu stops in his tracks to see Kairav at the door.

Kairav offers to bear any punishment that Abhimanyu deems fit for him but requests Abhimanyu to not leave Akshara as they both will not be happy while being apart.

However, Abhimanyu tells Kairav that he will get his punishment in due time but as far as his relationship with Akshara is concerned that falls apart because there is no trust left in their relationship.

Meanwhile, Akshara is talking to Manjari and asking her to wake up as she needs her support and love.

Akshara begins to give music therapy to Manjari while Abhimanyu walks to Manjari’s room.

Abhimanyu signals the nurse to start transferring Manjari for the travel.

Seeing Manjari leave, Akshara prays for Manjari to wake up and not go.

Akshara's prayers come true and Manjari wakes up in the corridor asking for Akshara.

Abhimanyu becomes happy to see Manjari awake and tells her that he is with her.

However, Manjari keeps asking for Akshara.

Akshara who is standing beside the door comes to Manjari and jokes to her about sleeping for so long.

Seeing Abhimanyu and Akshara together makes Manjari happy but she seeks assurance and asks them if everything between them is fine or not.

Mahima and Anand take over Manjari’s treatment while Akshara and Abhimanyu stand alone in shock.

After a while, Akshara thanks God for returning her mother to them and apologises to Manjari for lying to her but wishes for her full recovery.

He also tells him that Akshara has been giving music therapy to Manjari which has helped Manjari come out of the Coma.

Harshvardhan challenges Abhimanyu to tell Manjari about his divorce if he thinks that Akshara's presence does not matter to Manjari.

Abhimanyu is shocked at the revelation and recalls several moments when he saw Akshara in the hospital.

© Copyright tellybest.com, 2022, 2023. All Rights Reserved. Unauthorized use and/or duplication of any material from tellybest.com without written permission is strictly prohibited.
Cached Saved on: Monday 21st of November 2022 03:37:48 AMCached Disp on: Thursday 1st of December 2022 02:49:37 AM